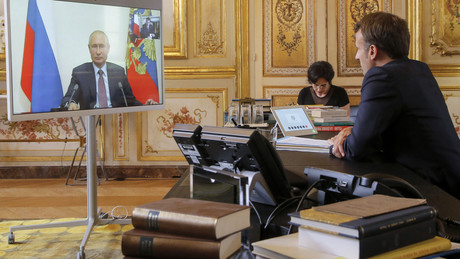 Poland’s Prime Minister Mateusz Morawiecki recently criticized the French leader’s efforts to maintain dialogue with Moscow amid the war in Ukraine. Morawiecki also accused Macron of having achieved little through dialogue with the Kremlin. “We don’t discuss, we don’t negotiate with criminals,” said the Polish prime minister, comparing Vladimir Putin to Adolf Hitler.

“These statements are both unfounded and scandalous.”

The French President also pointed out that Morawiecki, a well-known Eurosceptic, represents “a far-right party”, interfering in his country’s internal affairs and supporting his rival Marine Le Pen.

Macron has repeatedly promised to keep in touch with Moscow, despite calling Russia’s actions in Ukraine a “historic mistake”. Since February 24, the presidents have called each other a total of nine times. The two discussed the course of the peace negotiations between Moscow and Kyiv, as well as the evacuation of civilians. Macron insists on a ceasefire in Ukraine. At the beginning of February he traveled to Moscow to urge de-escalation.