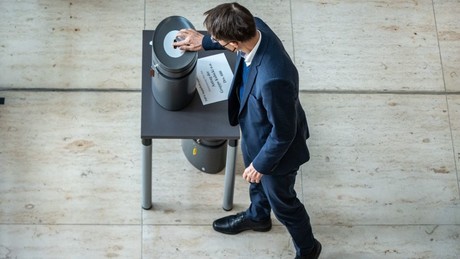 Bundestag debate on compulsory vaccination: None of the four proposed bills received the necessary majority. Alice Weidel (AfD) recognized the “Trojan horse”, Federal Foreign Minister Annalena Baerbock was flown in from Brussels and Karl Lauterbach shone with an unscientific thesis.

On March 7, the members of the German Bundestag debated whether vaccination should be compulsory in Germany. At the beginning of the meeting, members of the respective parliamentary groups were able to put forward their arguments for and against again. The only draft law that was drafted was the compromise proposal for compulsory vaccination for people over the age of 60. In this regard, two groups of MPs from the SPD, FDP and Greens had previously agreed.

The deputy leader of the SPD parliamentary group, Dagmar Schmidt, campaigned for a general obligation to vaccinate from the age of 60. Like almost all speakers from the SPD and the Greens, she went into the number of new infections and other daily statistics. Her focus was on the argument of “precautionary measures” for the coming autumn, whereby the existing “vaccination gap” could only be guaranteed via the cross-party traffic light proposal for vaccinations over 60 to be compulsory. If this is not decided, she is already advising every citizen “not to get sick, not to have an accident”.

MP Tino Sorge from the CDU is considered to be the spokesman for the CDU application, which focuses on the introduction of a vaccination register, but rejects immediate vaccination. With a stable data basis on the immune status in Germany, one could certainly look into the fall, based on the expected ignorance of which virus variant would then appear.

Alice Weidel from the AfD, the only party that categorically rejects compulsory vaccination, vehemently attacked the government and described the plans as “unconstitutional”. The Basic Law guarantees people in the country a right to physical integrity. Literally:

“The purpose of the Basic Law is to guarantee the civil liberties. Among these important and fundamental rights, the right to life and physical integrity stands out.”

A vaccination requirement would represent a “totalitarian presumption, a degradation of the individual”. It’s not about “knowledge, it’s about power of disposal,” and she gave the example of the lockdown regulation, which demonstrably had no positive effect on the pandemic events. For them, using the term “pikes” for the bold government vaccination campaigns, for the application of a new type of mRNA active substance, represents the “infantilization of the people”. In summary, an “unworthy vaccination haggling” was practiced politically. In her eyes, this was “undignified”. For Weidel, the obligation to vaccinate people over 60 represents a “Trojan horse”, since in the end it would become a “obligatory vaccination for all” people.

Wolfgang Kubicki from the FDP emphasized that “emotions” would predominate in the debate, but that “evidence” was more important. Herd immunity cannot be achieved through compulsory vaccination. Autumn can, but doesn’t have to, be critical, says Kubicki. The unvaccinated would not be responsible for the development of the past few weeks. There would have been no health care overload. The conditional approval of the vaccines used would continue to pose a “legal problem” for the FDP MP. The “compulsion to protect yourself” is not the responsibility of politicians, it is not the task of parliament. There is no legal justification for compulsory vaccination. Kubicki literally:

“It is not the job of the state to force adults to protect themselves against their will.”

The Green MP Janosch Dahmen once again referred to his well-known arguments of the past few weeks. “Tomorrow’s freedom” can only be secured by drafting mandatory vaccinations from the age of 60. According to Dahmen, the “majority of people” in Germany would support compulsory vaccination.

Another AfD MP, Martin Sichert, confronted the parties present about individual statements made before the last federal election. Now the situation is completely different. It is therefore “time to end the lies” to the statement to quote Chancellor Olaf Scholz: “We don’t need compulsory vaccination”. Sichert then described Scholz as a “lying chancellor”. He accused the former Federal Health Minister Spahn of having claimed that the “vaccination was properly approved”. This would also not be true due to the continued conditional approval of the currently used pharmaceutical products.

During the personal speech by the AfD MP, Chancellor Scholz was briefly absent from the plenary hall. The reason for this was explained by a tweet from ZDF employee Florian Neuhann.

Well – the German foreign minister @ABaerbock had to leave the NATO meeting early. At the request of the Federal Chancellor, she must take part in the vote on the #Vaccination participate in the Bundestag. It should not fail because the foreign minister did not have a voice. @ZDFtoday

Following his speech, the President of the Bundestag, Bärbel Bas (SPD), made two reprimands to Sichert. On the one hand for the term “lying chancellor”, on the other for the title of the Green MP Fester as “Bundestag chick”. In either case, Bas would have had an “attack on the person.” Health Minister Karl Lauterbach impressed in the debate with the unscientific statement:

“Omicron is a somewhat milder variant because so many people have already been vaccinated. If it weren’t the case, if everyone behaved as it was partly presented here, and nobody had been vaccinated, then we would now have a flawless one catastrophe and would be in total lockdown.”

Lauterbach informed his Twitter followers about the status of the debate directly from the plenary hall:

Following the individual speeches, there was a procedure of rules of procedure, with reference to the order in which the individual motions should be voted on by name. The individual votes by name of all members of the Bundestag present yielded the following results:

There was therefore no necessary majority for any of the four motions submitted. This means that vaccinations remain a voluntary choice for the time being. In addition, the so-called hotspot regulation is the only political instrument that exists. In his disappointment, the SPD deputy Weingarten expressed his very own perception, referring to the reaction of the AfD after the result of the first vote on motion 1 became known:

For the first time since 1945, the fascists in the Reichstag are cheering again. Thanks to the CDU. A low point for Parliament. @seeheimer@spdbt

According to dpa, the CEO of the German Hospital Society (DKG), Gerald Gaß, was also disappointed with the outcome of the vote:

“Ultimately, we are now faced with a shambles for which all parties are responsible. It was a failure with the announcement. I think it is inconceivable that the health authorities are now banning work for unvaccinated people in the health sector.”

Employer President Rainer Dulger commented in a first reaction: “This is not a good day for fighting the pandemic. Vaccination remains a central component in the fight against the pandemic.”