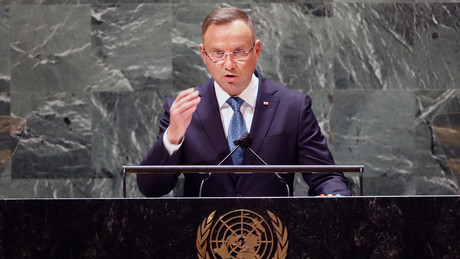 Poland has presented new proposals on how the European Union should deal with Russia. According to Polish President Andrzej Duda, the only right way is to provide military support to Ukraine and to impose sanctions and an ultimatum on Russia.

The only kind of diplomatic relations Western countries should have with Russia are ultimatums. This was stated by Polish President Andrzej Duda. In so doing, Duda defended the position of Prime Minister Mateusz Morawiecki, who had criticized some European leaders, notably French President Emmanuel Macron, for keeping diplomatic channels open with Russia.

For his part, Morawiecki compared Russian President Vladimir Putin to Adolf Hitler, Josef Stalin and Pol Pot, and stressed that such leaders should not be talked to at all. Duda literally:

“There is no point in dialogue with Russia. You should put very tough conditions on Vladimir Putin. You should say: ‘If you don’t meet these conditions, we have nothing to talk about.’ “

He called for more military aid to Ukraine and tougher sanctions against Russia. Talking to Russia without achieving anything “is just a game that Russia wants to play to gain time,” said Duda. Andrzej Duda said he hopes that no one in the “international community will ever talk to Putin any longer and see him as a decent and fair leader or just a politician.”

Poland’s growing hostility towards Russia is not shared by all EU countries. Macron has already responded to Morawiecki’s criticism by calling it “unfounded and scandalous”.

Hungary also opposed efforts to isolate Russia. Newly re-elected Prime Minister Viktor Orbán said on Wednesday that he had invited the heads of state and government of Russia, France, Germany and Ukraine to a summit in Budapest.

Poland has long been one of the most vocal advocates of isolation from Russia. The two countries have long had “tumultuous” relations in different forms. Polls show that anti-Russian feelings are widespread among Polish citizens.

Calls for treating Putin like Hitler escalated after Kyiv accused Russian troops of committing war crimes in Ukraine. Moscow called the accusations false and said their real purpose was to derail peace talks between the two countries.

The government in Warsaw, on the other hand, echoed Kyiv’s claims that Russian troops were allegedly committing genocide. “The goal of this invasion is simply the annihilation of the Ukrainian nation,” Duda claims. However, an independent investigation into the allegations has not yet taken place.