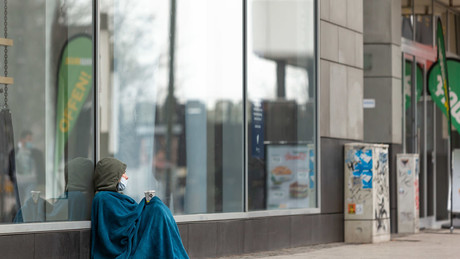 In almost all areas of life, prices are increasing immensely. The boards are almost overrun. According to poverty researcher Christoph Butterwegge, the federal government must ensure that instead of “freezing for peace” the poor can heat and eat well.

According to a study, many stock exchange companies in Germany pay a record amount of dividends to their shareholders: the profit distributions for the past year total 70 billion euros and thus almost 50 percent more than in the Corona crisis year 2020, according to calculations by the shareholders’ association DSW and the isf Institute for Strategic Finance at FOM University.

But in view of the enormous recent price increases, the very poor in this country are at risk of falling into poverty, warns the poverty researcher and political scientist Christoph Butterwegge. While the inflation rate meanwhile to over seven percent has risen, particularly due to very high energy prices, wages and social benefits have not risen nearly as much.

Because of the war in Ukraine, there were further price increases in all areas of life after the Corona crisis, even discounters have raised prices several times in the past few weeks. Capital Economics economist Andrew Kenningham recently wrote that the risks of stagflation, i.e. a weaker economy coupled with rising inflation, are increasing significantly.

In an interview with the ARD magazine Plusminus on Wednesday, the President of the Deutsche Bundesbank, Joachim Nagel, was concerned about the high inflation: “We already expect an annual average inflation rate of six percent in 2022. And of course that’s too much.” If the war in Ukraine continues, there could be further increases in energy prices and “spillover effects on the real economy”. People with low or middle incomes in particular would be hit particularly hard by the high prices.

“Since the Ukraine war, energy and food poverty have increased because, on the one hand, energy prices are rising sharply and, on the other hand, food prices have risen sharply.”

The standard requirement rates, which the traffic light coalition had increased for Hartz IV recipients at the beginning of the year, are far from keeping up with the sharp price jumps. Butterwegge finds it questionable if food banks increasingly have to not only supplement the welfare state, but partly replace it, because families with standard needs have too little money for groceries. Because that affects the children in particular.

But the table operators also report unprecedented challenges and increasing stress. For example, before the start of the war in the Ukraine, the food bank in Nuremberg served 50 to 60 portions on two days a week and in March almost 1,400 meals a day at its peak. A good 2,200 new customers from the Ukraine were added at the location in March alone.

Tafel depend on donations of unsold groceries from retailers. However, there is currently far less food available for collection at the ramps of the markets. A lot is donated directly to Ukraine, and less is left over in empty supermarkets. At the same time, these costs and the high food prices push many people affected by poverty to the limit and go to a food bank for the first time. While the food banks continue to serve everyone – including the many pensioners – they themselves are affected by the rise in energy, electricity, fuel and food prices: they have to pick up the food, maintain cold stores and have to heat rooms that are now open longer .

According to Butterwegge, the government’s energy relief package is better than nothing, but it is still a drop in the ocean. The immediate surcharge for children of 20 euros per month on the standard requirement planned from July is also insufficient. As a nutritional surcharge, 100 euros per person and per month are necessary.

“We are a rich country that tolerates a lot of poverty. The federal government has the responsibility to ensure that the poor in the country can also eat decently and instead of ‘freezing for peace’ they can also heat.”

However, the poverty researcher is not in favor of reducing VAT. “With VAT, we have a paradox. Although it hits the poor hardest because it is charged on every purchase, regardless of a person’s financial situation, reducing it would do little for the poor.”

This was shown in the Corona year 2020, when VAT was temporarily reduced from 19 to 16 and the reduced rate from seven to five percent. Poor people might have saved a few cents “if the tax cut was even passed on by retailers,” explains Butterwegge.

“But people who bought an SUV or an expensive design kitchen had a real advantage. With such a purchase, the tax savings were sometimes several thousand euros.” He is therefore more in favor of more targeted help for people who really need the money: low-income earners, benefit recipients and low-income earners from the lower middle class.

Even before the background of the euro crisis, however, the political scientist had spoken out clearly in favor of higher taxes on wealth and higher incomes in order to counteract the ever-widening gap between rich and poor. Because, for example, as he said in an interview in 2012 on wealth tax had said:

“It wasn’t abolished in 1997 under Helmut Kohl’s government, it’s still in the Basic Law, but it hasn’t been raised since then, and that would of course be one of the instruments that would be needed to skim off some of the wealth.”