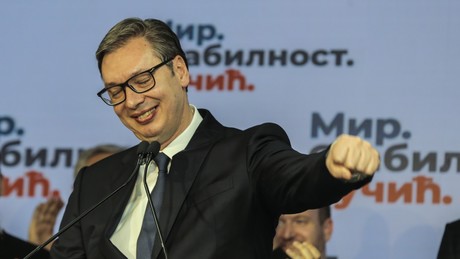 Although Aleksandar Vučić has held all the levers of power in his hands up to now, he has often been the target of an avalanche of criticism from both weak and divided, mostly non-parliamentary opposition representatives and foreign power centers. However, with his strength confirmed in the elections held on April 3, it is clear that he will deal with the major political challenges facing his country with more composure and credibility.

It is evident that Vučić managed to do what his predecessors had failed to do – win support for his policies of economic development, peace, stability and neutrality. All previous attempts to bring his country closer to NATO have failed because Vučić managed to avoid such traps and still side with the alliance that bombed his country in 1999. He also managed to avoid imposing sanctions on the Russian Federation, despite increasing pressure from Brussels every day.

Also on election night, when he spoke about the continuity of his policy and the next steps, the Serbian president promised the citizens of military neutrality and good relations with “traditional friends”. He was referring to Russia, China and other countries that support Serbia’s territorial integrity and do not recognize the self-proclaimed state of Kosovo.

However, Vučić is aware that pressure from Brussels is increasing and his government is being asked to “align its policies with the policies of the European Union”. This primarily relates to the need to impose sanctions on Russia. Observers of affairs in the Western Balkans tend to claim that the pressure in this area is now even greater as the election results are awaited. Now the new and old Serbian governments, which are still strategically committed to EU membership, will be faced with the old conditions again.

It is understood that Vučić, although strengthened by his new electoral mandate, will have less leeway to dodge demands from the Brussels administration.

However, considering that the potential partners of his Serbian Progressive Party (SNS) are predominantly right-wing and “Russia-affine”, one can assume that the Serbian president will continue to deal well with the blackmail from Brussels and will not give in to the pressure.

What the less-than-sympathetic Western powerhouses Vučić cannot deny is that he is the undisputed winner and they must count on his “renewed” strength, even though his party won fewer votes than in the previous elections.

With the help of its traditional allies – the Socialist Party of Serbia (SPS) and its President Ivica Dačić – as well as other smaller parties including the Alliance of Vojvodina-Hungarians (VMDK), Hungary’s national minority, which represents a good bridge to Serbia’s northern neighbor, where Last week’s elections saw Viktor Orbán emerge victorious again, Vučić can take a relaxed approach to forming a government and appointing a prime minister.

Ivica Dačić “nominated herself” in the election campaign for the post of prime minister. However, it is not yet clear whether the Socialist President will actually become the new Serbian prime minister. Ana Brnabić previously held this office. Miljkan Karličić, lawyer, specialist in the field of electoral law and permanent member of the Central Electoral Commission of Serbia (RIK), stated:

“The Vučić-Dačić tandem is a tandem that perfectly complements each other and emerged as a winning combination from these elections, allowing Serbia to build institutions, move forward, offer a higher employment rate and higher salaries. The most important task in the coming period is stable government and domestic stability, because these are turbulent times.”

Even after the elections, the pressure from the EU will not decrease, but it will be subdued

It is now perfectly clear that there is no change in policy. “Serbia remains militarily neutral and will not give up on traditional friends,” said analyst Zoran Milivojević. He added:

“These are well-known attitudes from the previous period, which were only reinforced by these elections. That is the message to Washington when it comes to our relations with Russia and China, which Vučić repeated very clearly and decisively after the elections. State and national Interests must not be given up.The struggle for Kosovo* remains on the same parameters and on the same basis, so there is no trade in the territorial integrity of Serbia within its constitutional borders, including the self-proclaimed ‘state’ of Kosovo*, which is in the Serbian constitution as the ‘Autonomous Province of Kosovo and Metohija’. Anyone who wants to make a difference in this region cannot do without Serbia, which reaffirmed the policies it has advocated so far in the elections.”

Milivojević stressed that it was “an objective fact” that had to be taken into account and that the West and its attitude towards the conflict in Ukraine and the sanctions the Russian Federation was facing certainly had the “credit” for such sentiment .

A convincing victory and the highest voter turnout in decades are arguments that cannot be overlooked. “No one here can influence the government and politics like they could until April 3,” declared analyst and former diplomat Zoran Milivojević categorically.

This election result guarantees the legality and legitimacy of the government, which had previously been questioned on several occasions, since the previous composition of the parliament was more or less one-party, with no real opposition, which Vučić discredited from time to time, both in the domestic political public and in of the world.

In the last month or two, sentiment in Serbia towards the European Union has fallen significantly. Support for NATO membership, although never significant, is now below 20 percent. Demands to include “military and political neutrality of Serbia” in the Serbian constitution are becoming louder and more frequent. The representatives of the “Progressive Club”, led by the historian Čedomir Antić, are openly calling for this.