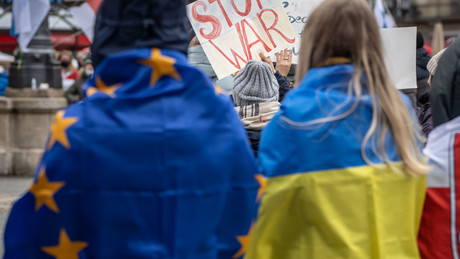 Russia’s invasion of Ukraine prompted the West to impose comprehensive sanctions on Russia. The actual theater of war has long since moved away from Ukraine. A full-scale and global economic war by the West is raging against Russia, affecting the global economy. The effects are already being felt around the world. This is threatening. But what is even more threatening is that the West lacks clearly formulated demands on Russia, the willingness to engage in diplomacy and a concrete exit scenario. It’s not about peace, it’s about annihilation.

In addition to sanctioning the entire Russian parliament and Putin himself, the EU’s probably most drastic step was to freeze Russian currencies. It has far-reaching negative consequences, especially for the euro. Of course there was a lot of malice towards Russia at the beginning. The value of the ruble fell immediately, the Russian central bank was limited in its possibilities. Russia had delivered its gas to the EU practically for free. The gloating was short-lived, however, because of course there was an answer. Gas buyers from the EU now have to open an account with Gazprombank, where they can pay in euros, which can then be exchanged for rubles. The ruble rate stabilized immediately.

The euro suffered the greatest damage because it can no longer be considered a safe currency. The EU has broken a basic rule and politicized its currency. The same applies to the dollar. With the move to comprehensively freeze Russian reserves, the US is accelerating de-dollarization. The euro as an alternative to the dollar is now also out. It should also be noted that there is no formulated condition that would allow Russia to regain access to its reserves. It remains unclear what exactly the foreign exchange freeze is intended to achieve, apart from harming Russia. What step is required of Russia that will lead to the country being able to dispose of its funds again is not said. Freezing foreign exchange therefore looks less like a sanction to achieve a concrete political purpose and more like ordinary theft. In any case, the EU has damaged itself in its unprecedented sanctions step and lost trust. She has made it clear that she will use the euro politically. Every country with trade relations with the EU will now consider whether it might not be the next to be punished by the EU and frozen reserves. The effect is inevitably the withdrawal of foreign exchange stored in the EU.

There is no exit scenario for the other sanctions either. This is absolutely problematic because it clearly shows that the EU has no interest in ending the conflict. You don’t talk to each other, you deliver weapons and you aim to inflict maximum damage. Anyone who thinks this is politics has understood nothing of politics.

The thesis of the intent to destroy is also supported by the fact that after the publication of the pictures from Butscha no investigation is awaited, but further sanctions are immediately imposed. If the EU were interested in a diplomatic solution, it would act differently, more cautiously. Too many questions are open.

Russia’s demands are clearly formulated, as are those of Ukraine. You negotiate about it and slowly get closer. The demands of the EU and Germany are not clear. That bodes badly. The EU is apparently pursuing the goal of total economic annihilation of Russia. Statements by the German Foreign Minister and the German Chancellor support this interpretation. Total Economic War.

The question that immediately follows is, of course, whether the EU can actually win the economic war it has instigated. Ethical questions are initially put aside here. It should only be noted here that the claim of the EU to stand for any values ​​has recently disappeared completely into thin air for the whole world to see.

In any case, the USA has already overstretched its sanctions regime. In order to maintain the oil embargo on Russia, they need to end the oil embargo on Venezuela. The USA also had to lift the embargo on fertilizers from Russia. Biden’s approval ratings are now below those of Trump. For Biden, the likelihood of a second term in office is dwindling as prices rise and the associated decline in prosperity in the United States.

Luckily, the EU Commission doesn’t have to fear elections, even if one rejoices with a cynical undertone. In any case, those who are responsible for the sanctions here cannot be punished with the ballot paper. Otherwise one or the other measure would probably have been reconsidered a little more thoroughly. However, one thing is already certain: In the EU and in Germany, the standard will drop massively. Even more so than in the US, which is undermining its own sanctions.

The German media don’t have enough either. German journalists in particular are increasingly demanding a comprehensive embargo against Russia. The economic war is to be extended, it is to be total. The German scribblers believe they know that the Germans are ready to make extensive sacrifices out of solidarity with Ukraine. If they don’t get a nasty surprise there.

The demand for a general ban on imports of Russian goods and Russian energy also shows a widespread lack of economic policy issues in the German mainstream. Germany is much more dependent on the supply of raw materials and primary products from Russia, but also from the Ukraine, than Russia is on the supply of German goods. This does not only apply to sunflower oil and wheat. Motor vehicle production in Germany is already threatening to slip into another serious crisis. The German manufacturers are dependent on preliminary products from the Ukraine, which are not supplied due to the war. A production stop is imminent. Other sectors are already affected. High energy prices are driving up costs and fueling inflation. If the supply of Russian gas were actually stopped, numerous companies would have to stop their production. The impact would be enormous. Germany would slide into a severe recession, with rising unemployment accompanied by rising living costs. A road to poverty, definitely a descent. Nevertheless, the German mainstream has no interest in peace and diplomacy. He cheerfully writes about the further escalation.

But not only Germany is affected by the repercussions of the sanctions, the other countries of the EU and the monetary union were not spared either. In Spain, truck drivers are on strike because of high fuel costs, there is also a lot of rumblings in France, there are growing shortages on supermarket shelves across the EU and strong inflation.

All the sanctions are being issued after a whole cascade of crises that have already slowed down the EU’s development. It has to be said clearly that after the financial crisis, Brexit and the Corona crisis, the EU currently has neither the stability nor the economic potential to enter an all-out economic war with Russia. The loser is clear from the start. This crisis will also further reduce the importance of the EU. It has long passed its peak and is contributing less and less to international GDP. In the foreseeable future, the EU is no longer an economic power. Your economic war against Russia will accelerate the decline of the EU, especially as the EU fails to form broad alliances.

Looking for partners turned Commission President von der Leyen recently turned to China and actually did everything wrong that you can do wrong when looking for supporters. She threatened, warned and demanded. Above all, she proved that there is one thing she is not: a diplomat. She was treated accordingly. Chinese President Xi Jinping let the EU know that it should stop pouring fuel on the fire, give negotiations space and finally develop an independent China policy. Referring to Ukraine, Xi said the parties involved should not intentionally disrupt the global economic system, much less use the global economic system for their own political gain or even as a weapon to enforce their own agenda.

clear edge. This is how the clear rejection of the EU, which had asked for support of the western sanctions, sounds.

The vast majority of countries are likely to take a similar view. In fact, the EU seems so sure of itself that it believes it can trigger a global food shortage and the nations of the world will still rally behind it and its long-abandoned values ​​in solidarity.

The sanctions pave the way for the further descent of the EU. It has no exit scenario, and it is also not clear what concrete goals the EU is pursuing with its sanctions regime – apart from causing damage and leaving scorched earth in its wake. The EU is strongly advised to reconsider its position. What is the purpose of the sanctions? Under what conditions are they revoked? The fact that it has so far failed to do so disqualifies the EU as a serious political dialogue partner. The EU has no vision for a peaceful continent, shows no willingness to engage in dialogue and, in its wild anger, is destroying all the foundations for the prosperity of its citizens. The EU is a total failure.