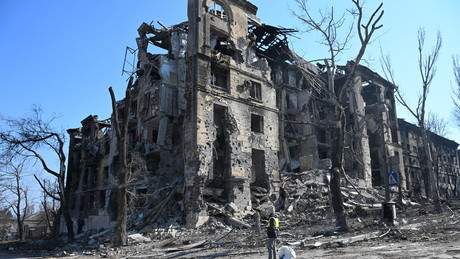 If the Wall Street Journal’s news is true, then the paper has revealed a huge, inhumane scandal. Because the death of thousands and the suffering of tens of thousands of people in Ukraine, no matter which side, appears in a completely different light because of the Wall Street Journal disclosure. The tragedy could have been avoided thanks to a diplomatic initiative by Chancellor Scholz and President Macron that was finally meant to be taken seriously. However, the prospect of a peaceful solution failed at the last moment, mainly due to the arrogant, nationalistic fanaticism of the political leadership in Ukraine, coupled with Washington’s obvious lack of interest in a negotiated solution.

Kiev’s gross overestimation of the combat effectiveness of its US/NATO-trained armed forces, the backbone of which was and still is formed by the fascist volunteer battalions, together with the bottomless stupidity of the political dilettante Vladimir Zelensky, has inevitably led to the current catastrophe.

Professional actor Vladimir Zelensky, who had previously played the role of Ukraine’s president in a TV satire as a political clown, was probably believing at the outset of the current crisis that he would play the heroic winning role in the Washington-written US/NATO to play the script. But the great Hollywood happy ending promised in the script was overtaken by the harsh reality of Russia’s successes in demilitarization and the ongoing denazification of Ukraine.

The US/NATO sanctions script to ruin the Russian economy was apparently written by political laymen from the US film industry. The Western scriptwriters obviously expected that after the first harsh sanctions smack on the left cheek, Moscow would turn the right cheek for the next smack. Instead, Russia has responded with counter-sanctions, with the result that US/NATO sorcerers’ apprentices are now being economically destabilized by their own sorcery. All of this could have been avoided, according to revelations in The Wall Street Journal, with a modicum of sanity and a little political courage on the part of Chancellor Scholz and President Macron towards the warlords in Washington.

Galloping inflation, slumps in production, mass unemployment and even more impoverishment are now threatening Germany too, but there are 100 billion euros for military rearmament in addition to the annual Bundeswehr budget. In view of this development one can only shake one’s head in bewilderment. Not only the government of the traffic light coalition has totally failed, but also the opposition parties CDU/CSU and Die Linke. They have all emerged as willing accomplices to Ukrainian Nazi understanders and avid followers of US/NATO-orchestrated war hysteria against Russia.

But it’s time we took a closer look at the Wall Street Journal article. It’s titled: “Vladimir Putin’s 20-Year March to War in Ukraine – and How the West Mishandled It” appeared. (In German: Vladimir Putin’s 20-year march to the war in Ukraine – and what the West did wrong.) In the very long article, which of course defends US policy, one finds hidden deep in the text by the way, the following passage:

“Mr. Scholz then made a final push for an agreement between Moscow and Kyiv. On February 19 in Munich (at the so-called ‘security conference’) he told Mr. Zelensky that Ukraine would abandon its aspirations to join NATO and that the Declare Ukraine’s neutrality as part of a broader European security deal between the West and Russia. The pact would be signed by Mr. Putin and Mr. Biden, who together would guarantee Ukraine’s security.”

“Zelensky said Mr. Putin could not be trusted to honor such an agreement and that most Ukrainians wanted to join NATO. His response left German officials concerned that the chances of peace were dwindling.”

The day after the Scholz-Zelensky meeting, French President Emmanuel Macron, in a call between leaders, appealed to Biden to make another push for diplomacy. According to the Wall Street Journal, Macron told Biden, “I think the last person that could do anything else is you, Joe. Are you ready to meet Putin?”

But Washington seemed uninterested in another diplomatic push. Nevertheless, according to the newspaper, Macron spent the night of February 20 talking alternately on the phone with Putin and Biden.

But Biden or his White House advisers were clearly uninterested in supporting Scholz’s proposal to guarantee Ukraine’s neutrality as part of a broader, European security deal between the West and Russia, jointly with Putin. At Macron’s urging, Biden merely told the French President that he could tell Putin that he was ready for another phone call.

But the next day, the Wall Street Journal continued, Putin called Macron back and said “he had decided to recognize the independence of the separatist enclaves in eastern Ukraine. He said fascists were in power in Kyiv while NATO was not in his security concerns and instead plan to deploy nuclear missiles in Ukraine.”

Unfortunately, the details of the German proposal, supported by Macron, for a peaceful end to the Ukraine crisis are not known. But under the impact of the real course of the war, which has assumed catastrophic proportions for the Ukrainian side, the Minsk government’s daydreams of NATO membership of a victorious Ukraine have evaporated. Things are getting tighter for Zelensky and his government. With each passing day of Russia’s special military operation, his political options melt away.

Either out of arrogance or ignorance, or a mixture of both, Zelenskyy has clung to the empty promises of the US/UK/NATO at the crucial stage of the diplomatic negotiations rather than to follow common sense. Ukrainian neutrality would not only have saved the lives of thousands of people, but would also have ensured that the two Donbass people’s republics would remain in an independent Ukrainian federation within the framework of Minsk II.

In his circle of advisors, however, one seems to have come a lot closer to reality. There is no other explanation for the fact that during the last Ukrainian-Russian negotiations in Turkey, Zelensky’s chief negotiator, David Arakhamiya, offered the Russians Ukrainian neutrality; basically nothing else that Scholz and Macron had already proposed as a solution to prevent the Russian military operation Zelensky.

It is a chilling “irony” when one realizes that all the human lives destroyed, all the cities, villages and industrial plants devastated by artillery fire, all the millions of refugees, all the suffering of the people on both sides of the front could have been prevented , if Zelensky had agreed six weeks ago to what his own negotiator has now voluntarily offered Moscow as a basis for negotiations. However, in the meantime a lot has changed on the ground of reality and a return to the status quo ante, especially to Minsk II in relation to the Donetsk People’s Republics, will probably no longer be possible.

But Chancellor Scholz, like President Macron, could have prevented the disaster in Ukraine. However, well aware of the fatal stupidity of Zelensky’s erroneous decision, neither Scholz nor Macron had the political guts to publicly say “no” to the US/NATO promises of military support for Ukraine, which Zelensky insisted on in his megalomania against Russia can, had strengthened.

A “No” would have been absolutely necessary, because the intentions of the warmongers in Washington and London were already clear to everyone at the time. Ultimately, it was about burning up Ukraine as cannon fodder in a military and economic war of attrition against Russia. It was also clear from the outset that this would demand significant costs from the German economy and population and will demand even higher ones in the future.

As a result, Chancellor Scholz has broken his oath of office to avert harm from the German people. Instead, he has served the interests of the US/NATO and EU elites admirably. But with the social democrat Scholz it’s like the story of the scorpion asking the frog to take him to the other bank.

More on the subject – Was the destruction of Mariupol avoidable?