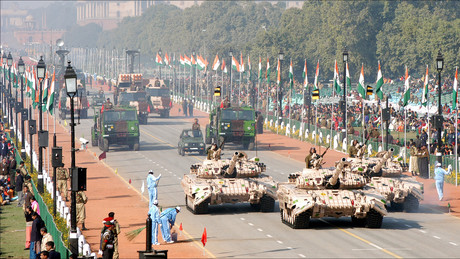 The Pentagon believes India should reduce its arms purchases from Russia and switch to US suppliers, the US Secretary of Defense told a hearing before US lawmakers. New Delhi must be persuaded to give up Russian weapons.

US Secretary of Defense Lloyd Austin has said that further purchases of Russian weapons systems by India are “not in its best interests”. The leadership in New Delhi should exchange some of these systems for US and allied armaments. India is the world’s largest military importer and gets almost half of its external arms supplies from Russia.

Austin’s testimony was in response to a question from US Rep. Joe Wilson, who described India as a “valued ally” of the US and “the world’s greatest democracy”. What, Wilson Austin asked, could the US do to “convince the Indian leadership to reject Putin and to join forces with their natural allies of democracy.”

The US Secretary of Defense replied that the US had “the best weapons systems in the world” and would offer them to New Delhi. He added that the Pentagon wants to continue working with India to ensure it understands that it is not in its best interest to continue investing in Russian equipment. During the hearing before members of the House Armed Services Committee, Austin further stated:

“Our challenge going forward is that they scale back the type of gear they invest in and invest more in the things that keep us compatible.”

The Pentagon chief is not the first US official to speak of an increase in US arms sales to India. Former US President Donald Trump signed a deal with Indian Prime Minister Narendra Modi in 2020 worth $3 billion for the delivery of Apache helicopters and Hellfire missiles.

Despite this surge in sales, the US remains just India’s third-largest arms supplier, supplying just 12 percent of New Delhi’s arms imports between 2017 and 2021. France, on the other hand, supplies 27 percent, while Russia holds a 46 percent share, which pay from the Stockholm International Peace Research Institute.

This partnership dates back to the Cold War, when India, as a founding member of the Non-Aligned Movement, bought arms from the Soviet Union without ever entering into a formal alliance with the USSR. According to some analysts, up to now 85 percent of the most important Indian weapons systems are of Russian or Soviet origin.

These include the Indian Air Force’s Su-30, MiG-21 and MiG-29 fighter jets, the Indian Army’s T90MS main battle tank and the Indian Navy’s only aircraft carrier, the Russian-built INS Vikramaditya. In addition, despite strong pressure from Washington, including the blatant threat of sanctions, New Delhi has pushed ahead with the acquisition of the Russian S-400 air defense system.

It’s unclear which weapons systems Austin would like India to “wind down” on investments in. In particular, allies’ acquisition of the S-400 system has angered Washington in the past. Turkey bought the Russian system despite repeated US warnings and was even sanctioned and banned from the F-35 fighter jet program as a result.

Austin’s call to India comes as the US is pressuring other world powers to isolate Russia over the military offensive in Ukraine. While EU countries immediately followed the call and sanctioned Russia, including to the detriment of their own economies, India has refused to give up its neutral stance and wants to continue trading with Russia, despite reassurances from the White House.

More on the subject – India’s Relations with Russia – Is India Bowing to Western Pressure?