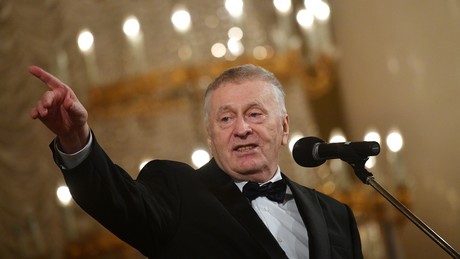 The prominent Russian politician Vladimir Zhirinovsky has died after a long and serious illness. This was announced by the speaker of the Russian State Duma on Wednesday. “RT DE” presents some of Zhirinovsky’s famous statements that left no one indifferent.

Zhirinovsky had a unique personal style that left few people indifferent. His rhetoric and crude humor earned him as many critics as fans. While some despised him, others admired him. RT DE has compiled some of his signature statements on a variety of topics, from politics to lifestyle.

On his actions as President

“My hands are clean, but they will be covered in blood when I become president.”

To the Russian language

“Children shouldn’t learn English. Instead, they should study the Kalashnikov rifle. Then the whole world will soon be speaking Russian.”

“Where does mad cow disease come from? From British democracy. What democracy are you talking about when 65 percent of Russia’s land is permafrost?”

“Dictatorship is constipation. Democracy is diarrhea. The choice is yours.”

to his Jewish origins

“Why should I renounce Russian blood, Russian culture, Russian land and love the entire Jewish people just because my father left a drop of Jewish blood in my mother’s body?”

“Our scientists will slightly change the Earth’s gravitational field during the night, and the United States will wake up underwater!”

“Let our people smoke. Smoking and drinking every day is the only salvation from suicide. If they stop smoking, they will hang themselves.”

On the subject of sex

“The rarer, the better. And only if there is mutual sympathy. Usually once a quarter, 3-4 times a year is enough!”

“Unfortunately, sex is a big part of my life.”

On the subject of stress

“How do I relieve stress? I’ve arranged that we have cheap plates in all offices. So it’s not too bad to smash them.”

To the British government

“In no other Moscow embassy are there diplomats as cheeky as in the British one. The most despicable secret service in the world is the British MI6. The main spies are British journalists, they get their salaries in two agencies at the same time.”

To life after death

More on the subject – Russia: Vladimir Zhirinovsky dies at the age of 75