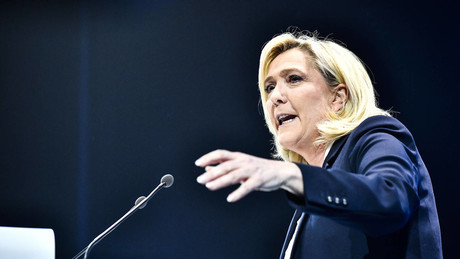 Numerous high-ranking financial and business representatives who are close to the EU are concerned about the outcome of the elections in France: A possible election victory by Marine Le Pen could therefore send the stock markets plummeting and weaken the euro even more.

Some prominent German economists are leaving according to n-tv from turbulences on the stock exchange in the case of a success of the right-wing conservative candidate Marine Le Pen in the presidential election in France. For example, the economic advisor to Federal Finance Minister Christian Lindner and former head of the economic experts, Lars Feld, said:

“If Le Pen were to win, this would result in turbulence on the financial markets. … There is no telling what the consequences would be for the stability of the euro area.”

Ahead of the first round of voting in Sunday’s presidential election, pro-European incumbent Emmanuel Macron is in Survey on Thursday, with 27 percent, only 3.5 percentage points ahead of his rival Le Pen. In a run-off election expected for April 24, there is speculation about an exciting neck-and-neck race between the two candidates.

That “means: higher yields on French government bonds, a slightly weaker euro and slight losses on the French stock markets.”

“The financial markets are expecting Macron to win, but are concerned that Le Pen is catching up in the polls. … Le Pen would weaken the position of the EU and NATO at a time when unity with Vladimir Putin is more important than ever. “

The 53-year-old still sees the EU and NATO critically, even if she no longer announced her intention to leave both organizations, as she did in 2017, adds Krämer and emphasizes:

“Furthermore, she rejects sanctions against Russia.”

If Le Pen finishes as strong as possible in the first ballot, Krämer therefore expects a negative reaction from the markets.

According to the Dutch wealth manager, a Le Pen victory would increase uncertainty for French growth, inflation and finances. A decline in trading volume on the European stock exchanges is also to be expected, especially on the Paris stock exchange. In addition, a higher risk premium on French government bonds and a further weakening of the euro would be possible. The euro has already fallen against other currencies such as the Swiss franc and the US dollar in recent months devalued. Analyst Gareth Gettinby forecast towards the business manager:

“The surprise of the Brexit vote is still fresh in our minds, so a Le Pen victory cannot be ruled out. This would greatly increase the uncertainty for French growth, inflation and public finances.”