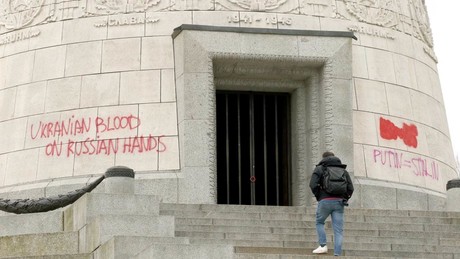 The Soviet memorial in Berlin-Treptow has been daubed with slogans and red paint. The Russian Embassy in Berlin condemned the act and said it was “deeply outraged by the blatant act of vandalism”.

Graffiti scrawls and other forms of vandalism are ubiquitous in Berlin. On Thursday, however, a memorial to the Soviet soldiers who died in World War II was again the target of an attack that the Russian embassy in Berlin classifies as clearly Russophobic and which is now the concern of the state security agency of the State Criminal Police Office.

On Thursday, the Russian Embassy complained about graffiti on the Soviet War Memorial in Treptower Park in Berlin expressed outrage. There, previously unknown perpetrators had spread slogans such as “Putin = Stalin”, “Fascists”, phrases in Russian, a “Z” shaped into a swastika or even the demand “Death to all Russians” in English. The Ukrainian Parliament claimed on Friday morning on Twitter that graffiti artists had identified the “true fascists” with it.

The Russian Embassy released photos of the smearings and said it viewed this “despicable act as a cynical violation of the memory of the soldiers who gave their lives to liberate the world and Europe from Nazism.”

“Again we point out that any tolerant handling of expressions of xenophobia and racism, with attempts to ignite Russophobic moods in Germany and to discriminate against Russian-speaking citizens is unacceptable.”

The embassy immediately informed the German law enforcement authorities and sent a protest note to the Federal Foreign Office of the Federal Republic of Germany. It called for the vandalism to be remedied, the circumstances of the incident to be clarified, those responsible to be brought to justice and comprehensive measures to be taken to prevent such incidents from happening again.

After the end of the Second World War, the Red Army erected four Soviet memorials in the urban area of ​​Berlin to commemorate the Red Army soldiers who died, around 80,000 of whom died during the conquest of Berlin. The complex in Treptower Park is the most prominent memorial in Berlin and at the same time a memorial and cemetery for over 7,000 soldiers. As Soviet war cemeteries, the facilities are to be permanently preserved and cared for by the German state in accordance with the Graves Act and the 1992 agreement on the preservation and care of war cemeteries.

The Ernst Thälmann monument in Prenzlauer Berg was smeared on Tuesday. In March, two World War II tanks were each draped with a large Ukrainian flag at the Soviet War Memorial near the Brandenburg Gate in Berlin. Police officers removed the flags a short time later. According to its own statements, the Russian embassy also officially protested to the Foreign Office at the time and demanded that the perpetrators be held accountable. In both cases, the diplomatic mission called for direct reports of possible attacks on Soviet war graves and memorials elsewhere.

On Friday afternoon, only a few paint residues and traces of the cleaning could be seen in Treptower Park, the majority of the monument was clean again.

According to reports, a property security patrol discovered the graffiti shortly before 1 a.m. and immediately made it unrecognizable. The state security of the State Criminal Police Office is investigating because of property damage and the use of signs of unconstitutional organizations.

According to the Berlin Association of People Persecuted by the Nazi Regime – Bund der Antifaschisten und Antifaschisten (VVN-BdA), this incident is “a dangerous example of the history-falsifying narratives” that have been circulating in Ukraine since the beginning of the war. The chair of the VVN-BdA, Cornelia Kerth, said to the nd: “We must not forget that the Soviet Union was invaded by Nazi Germany and had to mourn over 25 million victims in the course of the war; a significant number of them came from Ukraine, by the way . The Russian Federation is not the Soviet Union.”

More on the subject – Berlin: high-rise plans collide with the Soviet memorial