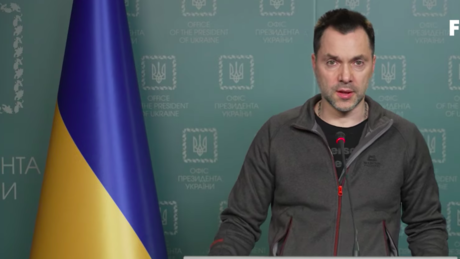 Did the military conflict with Russia suit the Ukrainian leadership? Three years ago, a military adviser to President Zelenskiy predicted a “major war” with his neighbor – down to the last detail. In his view, this was inevitable and by no means undesirable for a NATO perspective.

Ukraine knew about the Russian invasion plans in good time and prepared militarily for them. That’s what Ukrainian military expert and presidential adviser Alexei Arestovich said in a Wednesday statement published Interview. Russia began planning the military operation with 99 percent certainty in December 2020 and on December 26, 2021 the first operational readiness came. Arestovich also named the measures that Ukraine has taken against it:

“The armed forces and special services were put on increased alert. Ammunition, fuel and other material resources were distributed. We recruited and mobilized intelligence officers and took them to the districts. And then we announced a series of exercises, command staff exercises, under the guise of which the mobilization took place.”

Arestovich is currently the most well-known media face in Ukraine after Vladimir Zelenskiy. Every day he stands in front of the Ukrainian flag and announces the situation from the front, names the enemy’s loss figures and spreads some confidence in his compatriots with success stories. He is also a high-reach blogger and a popular interview guest. His statements always trigger waves of discussion.

Arestovich is a reserve major with 12 years of military experience. From September 2018 to September 2019 he served as a scout in a military unit on the Donbass front in eastern Ukraine. In the middle of this time another falls remarkable interview March 2019, which now sounds like a prophecy come true given the events of the past two months. The military expert told the internet magazine Apostroph the Russian-Ukrainian war, its course, the reason and possible consequences.

The conversation was about Ukraine’s NATO prospects. When the journalist asked the expert whether the Donbass war could be ended if Ukraine was granted MAP (Membership Action Plan) status, he said that this would most likely push Russia towards a major military operation against Ukraine. “Because they will blow us away infrastructural and have to turn everything here into a ruin.” He stated:

“They (the Russians) should do it before we join NATO, so that we don’t become interesting for NATO. More precisely, not interesting as a destroyed area. There is a 99.9 percent probability that our price for joining to NATO is a big war with Russia. And if we don’t join NATO, Russia will take us within 10 to 12 years.”

When asked which variant was better, Arestovich had no doubts: “Of course a big war with Russia and as a result joining NATO on the basis of defeating Russia.” He detailed what a “great war” with Russia meant:

“It’s an air offensive, an invasion of the Russian armies deployed on our borders, a siege of Kiev, an attempt to encircle the troops of the Donbass operation, a breakthrough through the Isthmus of Crimea, gaining access to the Kakhovskoye reservoir to supply Crimea with water, an offensive from the territory of Belarus, the creation of new people’s republics, an airborne landing, acts of sabotage against critical infrastructure, etc. This is a full-fledged war. And the probability of this is 99 percent.”

He made it clear to the journalist that Russia would not wait for Ukraine to get accession prospects through the MAP, but would act much earlier. This is consistent with Russia’s later rationale for invading Ukraine as de facto NATO military terrain, when Russia first granted NATO and the US one in December draft contract for NATO’s withdrawal and, in the event of rejection, with a “military-technical” answer threatened. Arestovich summed up his prediction again:

So, in 2019, the Zelensky adviser was sure that the West would help Ukraine to defeat Russia with comprehensive help – with weapons, equipment, new sanctions against Russia and very likely with the invasion of a NATO contingent, a no-fly zone, etc So Ukraine will not lose, which is already a good thing.

Three weeks after the start of the full-scale Russian military operation on February 24, Arestovich once again teased the Ukrainian media about his predictions attentive. From his point of view, the war with Russia was inevitable in the given geopolitical constellation. Russia would attack Ukraine, which is drifting into NATO, even if a more liberal president were in power instead of Putin.

“Because precisely the collision of our geopolitical plates and the logic of global confrontation make a Russian military operation against Ukraine necessary,” said Arestovich.

At the time of the interview in March 2019, Arestovich, now 46, was a supporter of then-President Petro Poroshenko, but switched to his team after Vladimir Zelenskyy won the presidential race. In October 2020 he was appointed the official spokesman of the Ukrainian delegation to the Trilateral Contact Group (OSCE, Ukraine, Russia) in the Minsk format and a few weeks later he was appointed adviser to the President on issues of strategic communication in the field of national security and defense. Arestovich is thus one of the closest circles of leaders in the government in Kyiv, and it can be assumed that the Zelensky team has long been well aware of his “prophecies”. Rather, it is the case that they are based on intelligence evaluations shared by the West with Ukraine.

In his recent interview, Arestovich made another notable comment on why the Ukrainian government, despite knowing the exact date of the Russian invasion, failed to provide security for the civilian population. In his opinion, the disclosure of such information would have triggered a mass exodus of refugees and 12-13 million people would have had to leave the left bank of the Dnieper. In this case, they would have clogged all roads and the 50 existing bridges (over the Dnieper River), which would have impeded the path of Ukrainian equipment to the front. The inhabitants should have been “shot at with tanks and crushed”.

The Donetsk and Luhansk People’s Republics began evacuating civilians from the war zone to Russia on February 18, six days before the start of the Russian military operation. By the end of March, more than half a million refugees had been brought to safety. As the Russian Ministry of Defense later claimed, citing secret documents held by the Ukrainian National Guard, Ukraine itself was planning an offensive in Donbass for early March.

The current one, which was adopted in March 2021 defense strategy By the way, Ukraine does not provide for the evacuation of the population. In the sense of “all-encompassing defence” it is much more likely to focus on arming as broad a population as possible and on guerrilla warfare. This means that numerous civilian casualties are accepted from the outset in a war that the Ukrainian leadership believed was unavoidable.