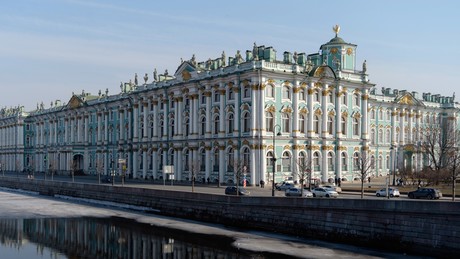 Finnish customs have confiscated Russian paintings returning from exhibitions in Italy and Japan. Today Finland allowed their repatriation to Russia. The Russian Foreign Ministry said the exhibits did not fall under EU sanctions.

The Ministry of Foreign Affairs of Finland has authorized the return to Russia of Russian cultural objects that have been detained at the Finnish border. The Finnish Ministry of Foreign Affairs stated that due to the introduction of new EU sanctions on April 9, changes in the sanctions law will come into force. This includes the possibility for EU member states to “issue permits for the transport of cultural goods to Russia within the framework of official cultural cooperation”.

Olga Lyubimova, the head of Russia’s culture ministry, told Telegram that the ministry is organizing the return of collections from Russian museums whose items have been detained by Finnish customs. She wrote:

“The artworks are expected to return to the Russian Federation next weekend.”

These are paintings and other museum pieces from the Hermitage, the Tsarskoye Selo, Pavlovsk and Gatchina museums, the State Tretyakov Gallery and the State Museum of Oriental Art. They were presented at two exhibitions in Italy: “Grand Tour. Myth, Vision and Sense of Italy” (until March 27th in Milan) and “The Shape of Infinity” (until March 23rd in Udine). In addition, artworks from the Pushkin Museum that had been on display at the Chiba Museum in Japan were also detained by customs.

According to Lyubimova, the European Commission made it clear that exhibits that took part in European exhibitions are not on the list of sanctions. She noted:

“The decision of the European Commission makes it possible to move the paintings previously held by Finnish customs.”

Earlier this week, Finnish customs reported that three consignments of goods subject to EU sanctions were stopped at the Finnish-Russian border. Mikhail Shvydkoy, the Russian President’s special representative for international cultural cooperation, later clarified that the goods in question are paintings from Russian museums that got stuck at customs because the Russian-EU border is there. He explained that the Ministry of Culture and Russian museums were looking into the issue and promised that the paintings would be returned to museum collections “after some bureaucratic procedures.”

On April 7, Finnish Ambassador Antti Helantera was summoned to the Russian Foreign Ministry. The ministry protested to the diplomat, stating that the return of the exhibits to the country should not be restricted.