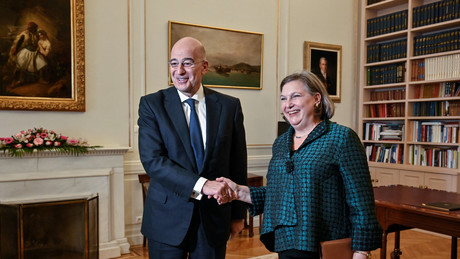 A proposed pipeline to deliver natural gas from gas fields in the eastern Mediterranean is proving too expensive and uneconomical, according to the US government. Europe is currently looking for alternative ways to quickly become independent of Russian energy.

The proposal that a pipeline could deliver natural gas from Eastern Mediterranean deposits to European markets is too expensive and economically unviable. In addition, the development will take too long to help countries with gas supplies that want to find alternatives to Russian gas in the foreseeable future. That said Victoria Nuland on Thursday.

These comments from the undersecretary for political affairs at the US State Department came days after the diplomat met with Israel’s Foreign Minister Yair Lapid and top diplomats from Greece and Cyprus in Athens.

Nuland said countries in the region had found dependence on Russian oil and gas amid the Ukraine war was “an extremely bad bet”. But she said the proposed EastMed pipeline project will not be able to immediately deliver the gas Europe currently needs to quickly become independent of Russian energy. Because the problem is not only the length of the pipes, but above all the water depth. Construction of the pipeline is expected to take more than a decade.

Cyprus, Greece and Israel signed an agreement in principle for the construction of the Mediterranean gas pipeline “EastMed” with the support of the EU and the USA in 2020 to lay a gas pipeline in the eastern Mediterranean. The Turkish government had condemned the deal at the time, saying the deal was aimed at “isolating” Turkey and northern Cyprus.

But the project has largely stalled since the US withdrew its support in January this year. According to the US State Department, the reason for this is that Washington’s interest has now shifted to renewable energy sources.

Nuland said in Athens that the US and regional partners including Israel, Greece, Cyprus and Turkey are looking at alternative ways to get gas to markets. A pipeline from Israel to Turkey would certainly be a shorter alternative for delivering gas to Europe. So far, however, such a plan has not been politically feasible. Cypriot Energy Minister Natasa Pilides told the AP last October that transferring gas via pipeline to Egyptian processing plants was the “most likely option” to get gas quickly to mainland Europe. At these Egyptian plants, the gas would be liquefied on board ships for export.

The world has been locked in a global struggle for energy resources since the outbreak of the Ukraine war that could determine the course and outcome of the war in Ukraine.

More on the subject – What will happen if Russia shuts off the gas supply to Europe?