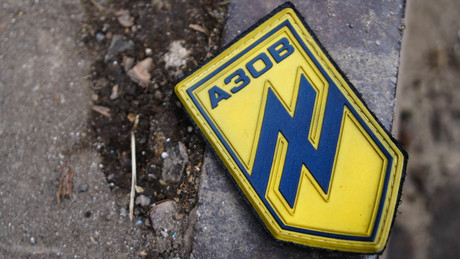 When the great black hole of silence opened up in Western Europe in 2014 to engulf the Odessa massacre, which was clear evidence of entrenched Nazism, it was already apparent that this poison would find its way back to its source. But what I couldn’t imagine was how twisted the story would be and how clearly every notion of anti-fascism would be turned into its opposite. A particularly repulsive example was recently provided by the CDU Pankow, which proposed melting down the monument to Ernst Thälmann in order to donate the proceeds from the metal to Ukraine.

They want to use Ukraine to attack Russia at any cost, even their own demise, and now Ukrainian Nazis must be ruthlessly promoted to do so. It’s no longer enough to pretend they don’t exist or to play them down by saying that they have so few seats in parliament when in reality they can let off steam like Colombian death squads: no, that’s what it’s about now to love her and hate everything Russian.

The voltes that are performed are abominable and destroy every bit of honor that this country was able to win back after the defeat of Hitlerite fascism. This was already apparent in 2014, when the entire German press repeated Poroshenko’s statement that hundreds of “separatists” would have to pay with their lives for every dead Ukrainian soldier without comment, without pointing out the similarity to Wehrmacht orders. Meanwhile, a Herr Melnyk, who not only claims to be an ambassador but is also courted, can declare all Russians enemies with impunity. Because now all Russians are supposed to be Nazis. After all, it worked so well for Joschka Fischer, who bombed Belgrade “because of Auschwitz”.

Of the correspondent ARD in Moscow is a particular expert in label exchange. Although he doesn’t have to do too much work there, he can fall back on Ukrainian propaganda, and he does: “Since the invasion of Ukraine, Russia has been compared to Nazi Germany again and again.” That such a comparison is, firstly, an unbelievable impertinence, especially coming from a German, and secondly, without any basis – what does it matter. It’s just the most important news program on German television. Of course there is no argument; it would also be difficult to find the camps of starving prisoners of war, those taken into forced labour, the obliterated places, those thrown alive down mine shafts, the victims herded into churches and burned; whoever claims such a thing has never looked into what the Nazi army did in the Soviet Union.

But now a sneaky trick is used. The leader of the Jewish communities in Ukraine is quoted as saying that the Russian actions “really resemble the practice of the Nazis during the Second World War”. If that’s what a Jew says… Of course, anyone who knows a little more about Ukraine also knows that Igor Kolomoiskij, who helped found Azov, is also Jewish, as is Zelenskij, who has just made a joint video appearance before the Greek Parliament with two representatives of this Nazi criminal gang, or Poroshenko quoted above; but on the other side, that of the Donbass republics, for example, there is also a whole series of Jewish Ukrainians, not to mention Russia; So the argument isn’t one, because attitude isn’t in the genes. But for the average viewer of the Tagesschau, Jew and Nazi at the same time are unimaginable, and this makes this statement, false as it is, unchallengeable.

Russia is fighting against an “alleged neo-Nazi regime”. If the big hole of silence hadn’t existed, such a sentence would be unspeakable in Germany. Incidentally, in France there are occasional breakthroughs of truth. This may have something to do with the fact that the SS Division Galicia, which is manned by Bandera Ukrainians and celebrated in western Ukraine, was responsible for the Oradour massacre.

The second witness cited by ARD is, which is only logical, a Russian, the philologist Gassan Guseynov. “Traditional anti-fascism, according to Gussejnow, is pure rhetoric that makes unrestrained use of National Socialist stylistic elements.” Aha. Evidence for this? None. On the Ukrainian side, however, there is not only Poroshenko’s theorem; the governor of Dnepropetrovsk also recently said that all Russians must now be killed; as if it were his job to put the General Plan East into practice after all. Calls from the Russian side to kill all Ukrainians have not even been presented by Ukrainian propaganda to this day. The fascist rhetoric only rings through with the Ukrainians.

But Guseynov sees the “National Socialist stylistic elements” somewhere else. “Moscow has been denying Ukraine’s right to exist for years and defaming the government as a Nazi regime sponsored by the West.” The extent to which this Ukraine is protected by the West can be seen from the fact that it has refused to implement the Minsk agreements for seven years and has not been reprimanded for this either from the EU or even from the USA. And Nazi regime? Yes, in every respect. “This is said to be committing genocide against Russian-speaking people in Ukraine and must be destroyed by force – like Hitler’s Germany by the victorious Red Army.”

As I said, the witnesses are carefully selected. Having hired a Jew to equate Russia with Nazi Germany, hired a Russian to fight the genocide in Donbass. That’s already cleverly done. However, it does not change the fact that the philologist quoted claims that there are “National Socialist stylistic elements” for all these statements, but such are not to be found when looking at his examples. In order to find a “National Socialist stylistic element” in a reference to the Red Army’s victory over Hitlerite fascism, you have to twist your brain in a way that at least clearly exceeds my abilities.

Then the twist to accuse Russia of Nazi language becomes really bizarre. As stated above, on the Ukrainian side this can easily be found, in the original intonation, by many different speakers; I’m just reminding you of the Eichmann quote that was served a few weeks ago on a Ukrainian television program to justify why not only Russian adults should be killed, but also their children. No, not even the Nazis said so openly.

But the Tagesschau doesn’t deal with that, that would make the swap impossible. “Nazi vocabulary is also being adopted without hesitation, says Guseynov. Foreign Minister Lavrov said that Russia was exposed to a ‘total war by the West’.” It’s amazing, this grip, for a philologist. At least he should be able to differentiate linguistically so that he notices the difference between “do you want total war” and the formulation of being exposed to such. It is that the first formulation is one of the perpetrators and presents the act as desirable, while the second is from the victims’ perspective and does not see them as desirable. The Nazis did not speak of facing all-out war. They wanted to lead him.

What Guseynov, in complete disavowal of his specialist knowledge, describes as Nazi vocabulary (perhaps he should read Klemperer, the little Reclam booklet LTI helps a lot there) is, if at all, a recourse to Soviet history, because the Soviet Union’s goal was said to be total war was. In the Tagesschau text, this ensures that the roles are completely reversed and Russia is presented as if it were Nazi Germany.

At the same time, of course, you have to whitewash the developments in the West, which are getting closer and closer to the historical model. “President Putin compared the cancellation of performances by Russian artists in the West with book burnings. Such a campaign to destroy unwanted literature was last carried out almost 90 years ago – by the Nazis in Germany, according to Putin.” Well, he’s actually wrong on this point. After the coup in Ukraine, Russian-language books were cleared en masse from libraries and shops there and, watch out, burned. Indeed. In Germany it is the first time since then. And on these points, the approach to the original is now happening, to a certain extent by reinfection via the Ukraine, at breathtaking speed.

“Meanwhile, Russian propaganda continues to ingeniously mix up past and present.” Oh, if only it were like that. Then one would only have to change words and not worry about what consequences it will have if the Ukronazis become active here, or how far this Germany, whose foreign minister actually says they want to “destroy” Russia, nor from entering the war or from a Reichstag fire is removed. In any case, any remnant memory of anti-fascism is currently being destroyed by lively perpetrator-victim exchanges and replaced by Ukrainian propaganda. Ultimately, it doesn’t matter whether Germany begins the renewed march into the night under “Heil Hitler” or under “Heil to the Ukraine, heal to the heroes”. Nazi salutes are both.