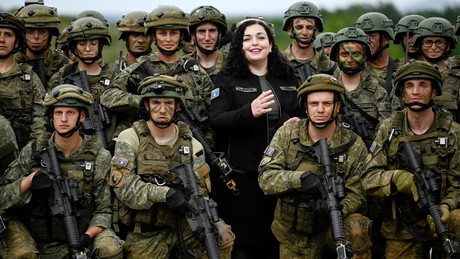 A few weeks ago, Kosovo called on the United States and its allies to speed up the country’s admission to NATO. In an interview, the president of the breakaway Serbian province emphasized that nothing could stop Pristina’s plans to join the alliance.

Kosovo is the country that is most committed to the US-led military alliance NATO and the EU. This was stated by Vjosa Osmani, the president of the breakaway Serbian province of Kosovo, in an interview with the Al Jazeera broadcaster. The 39-year-old was recently on an official visit to Qatar.

The political representatives of Kosovo had made similar statements several times in the past. Former Prime Minister Ramush Haradinaj even had explained in an interviewthat Pristina has no foreign policy of its own, but belongs to a “club of countries” led by the USA.

Politicians in Kosovo, which declared its independence in 2008 – which Serbia still does not officially recognize – have for years been unswervingly clinging to the goal of NATO membership. The issue is high on the foreign policy agenda in Pristina. Accession to the European Union is also one of the declared main goals.

Immediately after the start of the Russian military operation in Ukraine demanded Pristina urges the US and its allies to accelerate the Balkan country’s admission into NATO. The defense minister in Pristina also considered the establishment of a “permanent base” for the US armed forces in Kosovo to be “urgently necessary”. This is how “peace, security and stability in the Western Balkans and beyond” could be guaranteed.

so spoke In an interview with Al Jazeera, the Kosovan President once again stressed the need for a NATO presence in this part of Europe – again against the background of the war in Ukraine. Osmani even accused Russia of continuing “with the same approach” as in Ukraine. To threaten other countries “that opt ​​for the Euro-Atlantic path and also to threaten them that the procedure will be as in Ukraine.” She added:

“But that shouldn’t stop us from joining NATO.”

Osmani explained that in her view, NATO is not just a military machine, but a values-based system. In this regard, she emphasized:

According to Osmani, the inclusion of the countries of Albania, Montenegro and North Macedonia in the transatlantic military alliance has brought more security to the region.

Already in mid-March reported Reuters news agency that the Kosovan President wrote a letter to US President Joe Biden asking him to use Washington’s influence in NATO member states and help her country join the military alliance. In the letter, which is said to be dated March 10, the 39-year-old stressed that “after Russia’s invasion of Ukraine, joining NATO is her top national security priority.” That is “a necessity”.

In the letter, Osmani stated:

Against the background of the Ukraine conflict, Osmani also described Moscow as a threat “to democracy” in her interview with Al Jazeera. Above all, if Russian President Vladimir Putin gets what he wants, “that will be the end of democracy.” It was “the end of the rules of international law”. All countries, big and small, must unite to prevent this and “make sure the Putin regime falls.”

Around 3,700 NATO soldiers are currently stationed in Kosovo, 600 of them from the USA. The self-proclaimed independence of the breakaway Serbian province is also not recognized by four NATO member countries – Spain, Romania, Slovakia and Greece.

According to UN Security Council Resolution 1244, which formed the basis for stationing international troops under NATO leadership after NATO’s illegal attack on Yugoslavia in 1999, Kosovo does not have its own army – only lightly armed security forces.

The bombing of Yugoslavia was preceded by an armed conflict between the Albanian separatists of the so-called “Kosovo Liberation Army” (UCK) and the army and police of Serbia.

But Kosovo’s lightly armed security forces have been modernized and trained in recent years with material support from the transatlantic military alliance. A few years ago, the authorities in Pristina even announced that they would gradually convert the units into fully-fledged armed forces. This, in turn, triggered sharp protests in Belgrade – mainly out of concern for the safety of the few remaining Serbs (around 100,000 left) in the breakaway province. The Serbian army withdrew from Kosovo in 1999 as agreed. Since then, the international soldiers stationed there have been tasked with ensuring the safety of all residents.