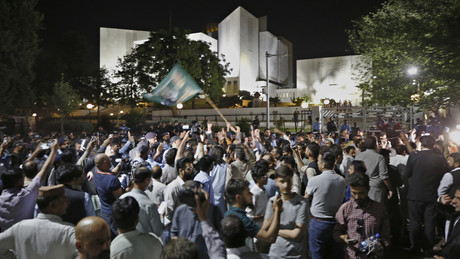 The deputy parliamentary speaker had refused to deal with the motion of no confidence. After consultation with the government, Pakistan’s president then dissolved parliament and announced new elections. However, the Supreme Court ruled that these decisions were unconstitutional.

Pakistan’s five-member Supreme Court on Thursday unanimously upheld both a decision by the Deputy Speaker of Parliament not to accept Prime Minister Imran Khan’s motion of no confidence in the government and the President’s subsequent decision to dissolve parliament in response, paving the way for new elections. classified as unconstitutional and rejected, as reported by the Pakistani newspaper Dawn.

More on the subject – Iran warns US against meddling in Pakistan

The short judgment of the Constitutional Court states that the deputy speaker’s decision violated “the constitution and the law” and was therefore not valid. The decision is thus rescinded. The decision by Pakistani President Arif Alvi to dissolve the National Assembly also violated the constitution and should therefore be regarded as ineffective. The court referred to an article in the Pakistani constitution according to which the Pakistani President cannot demand the dissolution of Parliament if there is a motion of no confidence in the Prime Minister in Parliament. Therefore, according to the judgment, it follows that Parliament has always existed and continues to exist.

The court also ordered a session of Parliament to be convened by Saturday morning at the latest and not to be adjourned until the motion of no confidence had been voted on. Pakistan’s Constitutional Court also barred the government from interfering with MPs’ participation in the vote on the no-confidence motion.

Pakistani opposition leader Shehbaz Sharif of the Muslim League told media representatives after the verdict that the court “definitely met the expectations of the people”. Pakistan People’s Party leader Bilawal Bhutto Zardari called the verdict a “victory for democracy and the constitution,” adding:

“Pakistan’s institutions and constitution have been protected. God willing, the no-confidence process will now be completed and we will implement electoral reforms and strive for clean and transparent elections.”

After the no-confidence motion was tabled, Khan accused the opposition parties of conspiring with foreign powers to overthrow him. He spoke explicitly about an alleged involvement of the United States of America in such a plan.