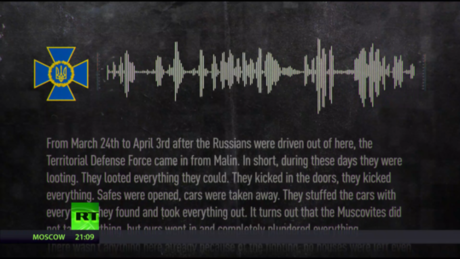 Looking for evidence of alleged atrocities committed by Russian soldiers near Kyiv, Ukrainian security officials and Western journalists have found something entirely different. According to overheard phone calls, the trail leads to Ukrainian militias.

Ukrainian security officials and Western journalists searching northwest of Bucha in the Kyiv region for evidence of atrocities committed by Russian soldiers found no evidence of human rights abuses by the latter. This emerges from phone records exclusive to RT, the authenticity of which cannot be verified. Instead, locals told journalists that Russian soldiers gave them food and generally treated them well. On the other hand, a Ukrainian official complained that the Ukrainian side’s militia had “looted everything” in the city.

In several satellite phone calls, a reporter (identifiable only as “Simon” in the recordings) reports to his colleagues about the results of his research, which he is conducting on foot. In Borodyanka, a town about 25 kilometers northwest of Bucha, contrary to his expectations, he found no bodies at all on the streets, the journalist said.

Although the city was “shot to rubble and ash,” says Simon, “but there are no signs of rights violations.” In fact, according to Simon, he and his camera crew interviewed several residents. They explained that the Russian troops had been very friendly and had provided them with food, water and other supplies. “And the statements in front of our running camera testify to that,” emphasizes the journalist.

“I don’t know what the prosecutor was talking about, but we didn’t see anything like that. Nothing at all. That’s a completely different picture,”

says Simon to his colleagues. A French journalist also saw a corpse – the person died in a grenade attack – but “no executions”.

The correspondent ended the conversation by saying that he wanted to return to Bucha to “find evidence of extrajudicial killings, but there is no sign of it here”.

Ukraine has accused the Russian military of killing more than 400 civilians in Bucha before withdrawing from the city near Kyiv last week. Washington and its allies, as well as the Western media, accepted Kiev’s claims uncritically and used them as an opportunity for further sanctions against Russia.

However, Moscow has repeatedly categorically denied the allegations, stating that Russian troops had already withdrawn from the city on March 30. Allegations of mass killings surfaced days later after camera crews and Ukrainian security forces arrived in the small town.

“Landwehr has plundered everything”

Another intercepted conversation between two officers from the Ukrainian Security Service (SBU) sheds light on the situation in Kuchari, a town about 60 kilometers northwest of Bucha. The content of this conversation also contradicts the prevailing media coverage from Kyiv and the NATO capitals. A suspected SBU officer, identifying himself as Sergei Anatolyevich (respectful address with patronymic and no surname) and using common Ukrainian swear words for Russians, speaks to a man with the surname or nickname Lessogor:

“From March 24th to April 3rd, after we drove the ‘Orcs’ from here, after the unit that drove them moved on, the Landwehr arrived from Malin… and during that time they raided. They They looted everything they could. They broke down doors and everything…opened safes, stole cars. They stuffed the cars with everything of value and took everything.”

Malin is a nearby town southwest of Kuchari that is currently controlled by the Ukrainian military.

The SBU man, of all people, positively contrasts the hated Russians with their own Ukrainian army:

“It turns out that the ‘Moskals’ didn’t take anything, but our people went in and looted everything.”

When Lessogor asks which unit exactly did the looting, Sergei Anatolyevich replies that nobody knows for sure: “Some say ‘Volhynia’, others say someone else”. “Volhynia” refers to the militia of the region of the same name in western Ukraine. Legislation in Ukraine was recently amended in such a way that the deployment of militia is now also permitted outside of their respective areas of deployment and responsibility.