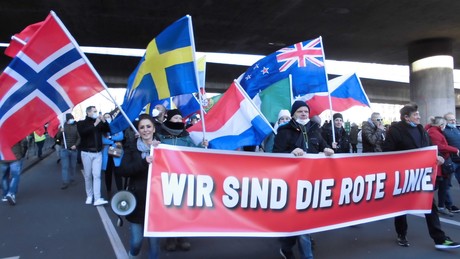 Even those who have been politically active for a long time can often only be amazed at how much creativity and wit many participants express their criticism and demands at corona-critical demonstrations.

a comment by Felicitas Rabe on the Coronademos in February 2022

It should not be forgotten that the majority of those who criticized the corona measures were neither politically active nor had they ever taken part in demonstrations before the pandemic began. So sociologists would have, if they were interested in studying a completely new phenomenon that has arisen in the last two years.

What means do people use who have so far paid little attention to politics to bring their resistance to the public? How do they organize themselves in the face of massive repression by the authorities? How do they orient themselves, are there political role models?

It remains to be seen whether this form of resistance, which emerged almost overnight, and the way in which it is expressed, will ever be examined by social scientists. Currently, research tends to avoid topics that could scare off university sponsors and third-party funders. Not for the first time in history, a social movement undesirable to those in power runs the risk of being suppressed and its criticisms silenced, without later generations learning about the diversity and details of this resistance.

Even a sociological layman might notice how untypical the demonstrations, which are critical of the measures, are unfolding in comparison to other protest movements. In Germany, demonstrations are traditionally mostly made up of political blocks, which are also reflected in the line-up on the street. People sort themselves according to ideological affiliation and walk in blocks behind a corresponding political banner.

But the resistance to the corona measures is not recruited from the supporters of political parties, trade unions and NGOs. Rather, it represents a broad cross-section of the population with no clear political affiliation – with small proportions from the left and right spectrum. Perhaps that is also one of the reasons for the considerable repression? Because the low degree of involvement of classic political and social organizations and the lack of identification with the established political actors certainly also makes political control of the protest more difficult.

From the perspective of those in power, the anti-corona movement acts in an almost unpredictable and anarchistic manner and meets the criteria of a real grassroots movement. That there could be such a large mass movement again that was not planned by the rulers like the so-called color revolutions, for example, was apparently not expected at all!

One can see the creative and witty grassroots spirit in many of the new movement’s forms of self-organization.

It is reflected above all in the impressive amount of individually designed posters and funny slogans. Because at German demonstrations organized by the established actors, traditionally conservative moral slogans usually dominate the field.

In contrast, the sight of the forest of signs at a Düsseldorf anti-corona demo testifies to the creative and unconventional potential of the resistance in dealing with the ever-new challenges posed by corona politics. In view of the repression that has prevailed for two years, an unexpectedly relaxed determination is presented. The respectful treatment of each other and the solidarity beyond any ideological identification also radiate a strength that supports the common resistance.

The unifying power of this creative mood of resistance can be experienced in many places in Germany at corona-critical demonstrations.

More on the subject – Leipzig: At least 2,000 people demonstrate for “freedom and peace”