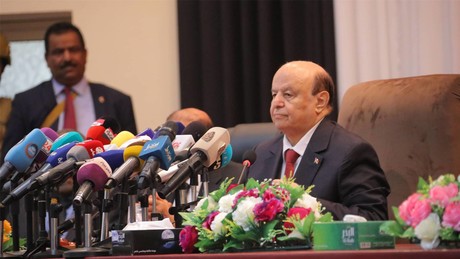 Yemeni President Abed Rabbo Mansur Hadi, who is not recognized by all sections of the population, has transferred his powers to a new Presidential Council, as he announced on Thursday. A Houthi official, however, said the presidential council was an extension of the occupation.

Boost for negotiations to end the seven-year war: Yemeni President Abed Rabbo Mansur Hadi, who is not recognized by all sections of the population, has handed over his powers to a new Presidential Council.

On Thursday, Hadi, who has lived in Saudi Arabia for years, transferred his power to a new presidential council and deposed Vice President Ali Mohsen al-Ahmar by decree. This was reported by the state news agency Saba.

Hadi announced that the new body, called the “presidential leadership council,” will temporarily assume the duties of the president and his deputy: “I irrevocably delegate my full powers to this presidential leadership council,” he said in a televised statement early Thursday , the last day of the peace talks in the Saudi Arabian capital Riyadh, which the Houthis stayed away from because they saw no future for the country under Hadi.

The new council should also negotiate a “final and comprehensive” solution to the war with the Houthis.
The council is to be led by former Interior Minister Rashad al-Alimi. The mandate is due to expire when “complete peace” is restored in the country.

The Hadi government was backed by a military alliance led by Saudi Arabia. The war has worn down the heavily impoverished country and plunged it into a humanitarian catastrophe. Since 2015, the ACLED data and analysis project has counted more than 150,000 deaths from the war, including 14,000 civilians.
Most recently, there was hope for at least a temporary relaxation of the conflict. Last Saturday, at the beginning of the Muslim month of fasting, Ramadan, a ceasefire came into effect – the first nationwide ceasefire since 2016. According to the UN, violence has since decreased significantly.

Following the announcement, Saudi Arabia said it would allocate $3 billion to support the country’s war-torn economy, according to state agency SPA. $2 billion would come from Riyadh and another $1 billion from the United Arab Emirates (UAE), which is part of the Saudi-led military coalition. Saudi Crown Prince Mohammed bin Salman immediately met with Council members and said Yemen could start a “new chapter” with him.

Muhammad Al-Bakhiti, a member of the Houthis’ political bureau, reacted less enthusiastically to the move, which came as a surprise. He told the news channel Al Mayadeen that Washington had removed the legitimacy of the Saudi aggression against Yemen with the establishment of the Presidential Council.

A member of Ansar Allah Political Bureau, Muhammad Al-Bakhiti to #AlMayadeen: The real legitimacy in #Yemen is for those who defend the country’s independence, and the Presidential Council is an extension of the occupation and does not have any legitimacy.@M_N_Albukhaitihttps://t.co/17CqhlAp7M

“Rashad Al-Alimi was elected chair of the new council because he is an American asset,” Al-Bakhiti said. Al-Alimi was the only one who didn’t show any discomfort with the passage of an article legalizing the US presence in Yemen. Al-Bakhiti further asked:

“We were about to take such a step a day before the start of Saudi aggression against Yemen, so why are the US and Saudi Arabia making such a decision today?”

The real legitimacy in Yemen rests with those who defend the country’s independence, and the Presidential Council is an extension of the occupation and has no legitimacy whatsoever, Al-Bakhiti told the channel.