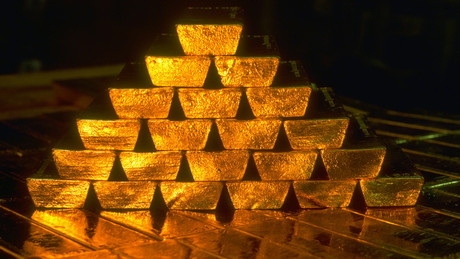 Due to the strengthening of the Russian currency, Moscow has decided to adjust its gold purchase plan announced at the end of March. This was announced by the Russian central bank. From this Friday, the precious metal is now to be bought at a “negotiated price”.

The Central Bank of the Russian Federation has changed its gold purchasing policy due to the strengthening of the domestic currency and will now buy the precious metal at a “negotiated price”. The regulatory authority announced this in a press release on Thursday. The measure comes into effect on Friday.

On March 25, Russia’s central bank said it would buy gold at a fixed price of 5,000 rubles ($52) per gram until June 30. The fixed price was below market value as gold trades at approximately US$62 per gram on the international market.

The measure was introduced to prop up Russia’s national currency, which had fallen sharply after a number of Western countries, including the US and most EU countries, imposed economic sanctions on Moscow over Russia’s military operation in Ukraine. On March 25, the exchange rate was still around 96 rubles per US dollar and 107 rubles per euro.

In the past two weeks, however, the Russian currency has appreciated after Moscow announced a new ruble payment mechanism for natural gas exports in response to Western sanctions. This week alone, the currency is up 20 percent, hitting a six-week high against major currencies on Thursday, trading at 75 rubles per US dollar and 81 per euro.