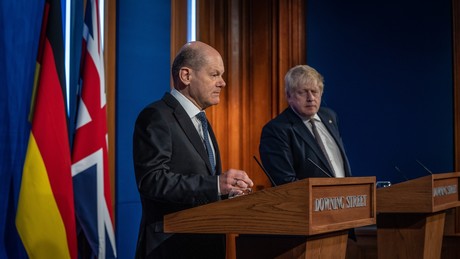 How united is the EU? Chancellor Olaf Scholz has according to t-online defended French President Emmanuel Macron’s talks with Kremlin chief Vladimir Putin against loud voices from Poland. On Friday, after meeting British Prime Minister Boris Johnson in London, he said:

“The criticism of the French President is unjustified, to be very clear.”

Scholz advocated continuing to talk to Putin despite the alleged Russian war atrocities in Ukraine.

The traditionally good relationship between Warsaw and Paris has been strained since the beginning of the war in Ukraine. Polish Prime Minister Mateusz Morawiecki recently accused Macron of his phone calls with Putin, saying that no one had negotiated with Adolf Hitler or Josef Stalin. The Polish Foreign Ministry then summoned the French ambassador on Friday after Macron had defamed Morawiecki in an interview as a “right-wing extremist anti-Semite”.

Scholz also said on Friday that Macron was trying, with the talks he was having with Ukrainian President Vladimir Zelenskiy and Putin, “to make a contribution to ensuring that we have a chance for a ceasefire, for the withdrawal of Russian troops”. Since he exchanges ideas with Macron very often on these issues – just like with Johnson and US President Joe Biden and others – he knows that.

In the talks with Putin, it is very important to have a clear point of view, Scholz continued:

“Ukrainians are negotiating about Ukraine. And no one will replace them on this issue.”

They also try to tell Putin how the situation “really is” – e.g. B. how high the number of killed Russian soldiers is. Scholz on this:

“Because there is a very terrible consequence for the Russian army.”

The talks are always about the ceasefire, the withdrawal of troops and Ukraine being able to decide its own fate, Scholz summed up and concluded:

“To say that remains necessary in this situation.”

more on the subject – After malice over talks with Moscow: Macron shares against Morawiecki