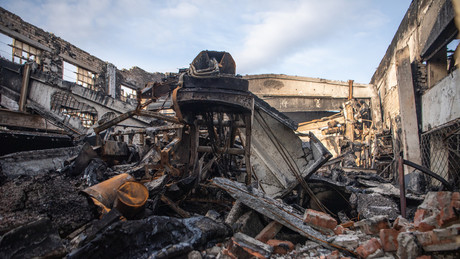 The Russian military offensive in Ukraine is still ongoing and recent events have sent shockwaves around the world. The tragic killings in Ukraine’s Bucha must be assessed honestly and not used to fuel information warfare.

A few days after the withdrawal of Russian troops from the small town of Bucha near Kyiv, advancing Ukrainian authorities reported there countless corpses of civilians to have found. What happened in Bucha is now compared in the West to the massacre in Srebrenica – the Balkan town that became a symbol of the war in Yugoslavia. When assessing the events in Bucha, however, one should note the following.

Undoubtedly, civilian deaths are always a tragedy and must be properly investigated. The rebellion in the Donbass and the resulting military intervention by Russia can be described as one of the bloodiest armed conflicts in the post-Soviet space. The large-scale Destruction of Mariupol during the Russian offensive, a group of Russian prisoners of war, taken by Ukrainians shot in front of cameras were, and a missile attack on residential areas of Donetsk by Kiev troops are just some of the atrocities this war has produced so far. Bucha is another on this list.

In the period from February 25 to mid-March, when Russian troops controlled this small town, fierce fighting broke out. But at the end of March the Russians withdrew and the Ukrainians entered the city, followed by journalists from the French state media. They found dozens of dead civilians, some of whom journalists said had been unburied for days or even weeks. What happened in Bucha is undoubtedly a terrible tragedy. It is also worth noting that both Russia and Ukraine have requested an emergency UN Security Council meeting on what is happening in the city. However, the two countries describe what happened there in opposite directions. Little can be said with certainty about the events in Bucha. But one thing is clear – this tragedy requires proper investigation.

However, some observations can already be made. Most of these people must have been killed by artillery fire. There are several factors that support this theory. The most obvious evidence is that some of the bodies were found next to craters that look like shell impacts, as can be seen in various video footage. The fighting took place right on the streets of Bucha. On February 27, a large Russian military convoy was hit by Ukrainian artillery on Voksalnaya Street. The shelling by the Ukrainian military did not stop even after the city was captured by Russian troops.

It has to be mentioned that both forces mainly use conventional tube and rocket artillery systems firing conventional high-explosive shells with low accuracy. When deployed in populated areas, they can easily kill bystanders, even if they are far from the intended target.

On the other hand, armored vehicles constantly maneuvered through the streets of Bucha, which, unfortunately, can lead to civilian casualties, even when the troops do not intend it. Visibility from inside an armored vehicle is very limited, so the likelihood of running over and crushing civilian vehicles during sharp maneuvers is very high. Local militia units regularly used civilian transport, including ambulances, which has become a distinctive feature of combat operations in Ukraine. This often results in the military shooting at suspicious civilian vehicles.

In addition, at least one of the bodies found on the street had his hands tied behind his back with a white cloth. Curiously, this particular circumstance has a reasonable explanation – it is customary to tie a corpse’s hands together for transport to keep them from hanging loosely. The hands of killed rebel fighters taken to a Donetsk morgue in May 2014 were tied in the same way. Even then there was speculation about the execution of the men.

Finally, it must be mentioned that in every war there is always looting that is not ideologically motivated. The mass distribution of weapons among the local population has strengthened criminal groups, which is confirmed by the fact that many of the marauders arrested at crime scenes were heavily armed.

The people whose bodies were found in Bucha were most likely killed at different times and as a result of different incidents, which incidentally explains the strange indifference to the tragedy on local social media – contrary to the reactions in the Anglo-Saxon press.

This article is not intended to accuse or exonerate anyone. However, the author would like to remind the reader that it always takes an impartial investigation – preferably an international one – to put an end to a serious matter like this. Such tragedies cannot be avoided when two armies are fighting in an urbanized, densely populated area where many civilians are present.

At the moment, the only thing we know for sure about Bucha is that it is a terrible war tragedy. The victims must be mourned and remembered; the fighting must be brought to an end through peace talks as soon as possible. Specific episodes of civilian deaths must be adequately investigated to clarify the circumstances of each tragedy.

It’s only natural to be overwhelmed with emotion at the sight of a disfigured corpse. But let’s not forget that every story of this kind also triggers military propaganda. Especially in today’s social media era, where such campaigns can manipulate global opinion in mere hours. We must be careful not to let this fool us.

Yevgeny Norin is a Russian historian specializing in Russia’s wars and international politics.