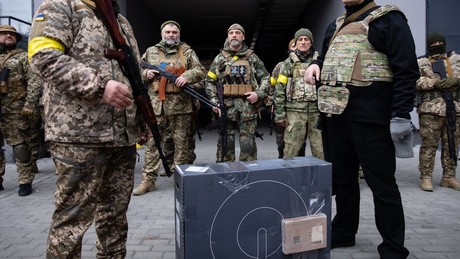 Elon Musk’s influence on the military and thus on all theaters of war, such as that in Ukraine, is increasing. Its Starlink satellite Internet service is currently even being used at the front. The Ukrainian army uses it to conduct drone strikes on Russian forces.

This week, 5,000 more Starlink sets were shipped to Ukraine by the United States Agency for International Development (USAID). The costs will be borne by the US government, the US agency told CNN.

“The Starlink satellite terminals allow unlimited, unthrottled data connections from anywhere in Ukraine. The terminals will allow officials and essential service providers to continue to communicate within Ukraine and with the outside world,” even as the war unfolds fiber or cellular connections should cut the Ukraine, it says in one Explanation the USAID.

At the beginning of the war, Musk had already offered to provide the country with satellite-based Internet connections at the request of Ukraine’s Digital Minister Mikhail Fedorov. With “Starlink”, SpaceX currently operates the most powerful satellite-based communication network, with over 2,000 mini-satellites already in orbit.

Musk was heavily criticized on Twitter for his decision to intervene in the Ukraine war. The Internet community complained that the Starlink technology was not intended for use in crisis areas, and scoffed at the fact that the Ukraine would never get its hands on enough satellite transmitters. The tech billionaire then delivered base stations to Ukraine by the container.

Among other things, the Ukrainian President Vladimir Zelensky uses the technology to broadcast his video appearances in front of parliaments around the world. He also posts his social media views via Starlink. However, the Starlink system, originally designed by Musk as a civilian program, is increasingly being used militarily to control Ukrainian drones and for long-distance reconnaissance.

It is explosive that there were no secret cables, no long debates and certainly no government or parliamentary controls regarding the military use of Starlink in advance – just a Twitter deal between Fedorov and an enigmatic US billionaire, the Russian President Vladimir Putin to the “Single Combat” challenged. What at first looked like a public relations coup now appears to be playing an important role in Ukraine’s defense and once again reveals direct US government influence in the war.

As the British newspaper The Telegraph reports, the Starlink system is used by the Ukrainian army for drone attacks on Russian tanks and positions. Accordingly, Starlink is primarily of military importance in areas where the infrastructure is weak and there is no Internet connection. According to the report, Ukraine’s private air reconnaissance unit Aerorosvidka uses Musk’s satellite internet not only to monitor unmanned aerial vehicles (drones), but also to coordinate them. This allows the Ukrainian armed forces to fire targeted anti-tank weapons against Russian targets.

“We use Starlink equipment and link the drone team to our artillery team,” an officer with the Aerorosvidka unit told The Times newspaper. “If we use a drone with thermal vision at night, the drone has to be linked to the artillery team via Starlink and perform a target lock.” According to the Times report, the Aeroroswidka team conducts about 300 intelligence-gathering missions a day. According to the newspaper, the attacks on Russian forces mostly take place at night, as the drones, some of which are equipped with thermal imaging cameras, are difficult to see in the dark.

Russia, meanwhile, has criticized Musk’s Ukraine offensive as aggression. Dmitry Rogozin, the head of the Russian space agency Roskosmos, described Starlink’s activities as interference. “When Russia asserts its highest national interests on the territory of Ukraine, Elon Musk shows up with his Starlink, which was previously declared purely civilian,” he told RT. To which Musk responded on Twitter: “The civilian internet in Ukraine was having some weird outages – bad weather maybe? – so SpaceX is helping to fix it.”

The fact that Musk’s initiative in Ukraine was primarily on behalf of the US military can be guessed from statements made by the supreme commander of the US Space Force to US senators at a meeting of the US Senate Defense Committee in early March. US Space Command was impressed by SpaceX’s ability to provide stable Internet access to war-torn parts of Ukraine, General James Dickinson enthused to US senators, according to US magazine Space News:

“What we’re seeing with Elon Musk and the Starlink capabilities really shows us what a mega-constellation or an expanded architecture can offer in terms of redundancy and capabilities.”

Dickinson was responding to questions from U.S. Senator Tim Kaine, who previously noted that Starlink’s ability to transmit communications from space through Ukraine is “positive news” and an example for “private actors in space who are in… invade contested environments”. “Russia was trying to jam the signals and block reception, and that made me wonder,” Kaine said, implying direct involvement of the US Senate in Musk’s Ukraine offensive.

However, there does not seem to be a legal framework for SpaceX’s work in Ukraine, because Kaine also asked the US general at the hearing whether there was any “legal framework” for commercial US space companies operating in controversial situations engage. “We’re looking into that, Senator,” Dickinson replied, according to the Space News report:

“We are very much working on this issue with our commercial integration group.”

the Commercial Integration Cell (CIC) is a group of ten commercial satellite operators working side-by-side with US Space Command at Vandenberg Space Force Base in California. The CIC was originally established by the United States Strategic Command to share intelligence on space threats and other emerging issues of concern given the military’s reliance on commercial space services such as SpaceX. CIC includes Intelsat, SES Government Solutions, Inmarsat, Eutelsat, Maxar, Viasat, XTAR, SpaceX, Iridium Communications and Hughes Network Systems.

The fact that Starlink is increasingly serving US military interests instead of those of the global civilian population can be guessed not only from SpaceX’ CIC membership, but also from the many contracts the space company has with US authorities that have become public. Among other things, the US Air Force is currently testing whether the Starlink system can also be used for the high-speed data transmission required to coordinate its latest F-35A fighter jets. The F-35A fighter jets are also to become the European Union’s new air force standard. Several EU member states had announced the purchase of the combat aircraft for their respective armies in the past few weeks.

The Starlink system is particularly well-suited for use with the F-35A, as the necessary equipment fits into the fighter jet’s transport pod and the system can be deployed in less than ten minutes. In addition, it can be set up by any trained pilot, according to the US Air Force report. Lieutenant Corbin Meredith stated:

“What we really want are options for communication. We don’t have the infrastructure in all possible places, but with this system we can move to SATCOM or LTE cellular and then fall back to offline capabilities as a last resort. The fact that anyone can be trained to set it up gives us more staffing options and adds another element to creating multi-capable airman.”

In its testing, the US Air Force found that Starlink was the better alternative to the current military satellite internet, as the old system not only required a longer lead time to set up, but also lacked the high-speed data transfer needed to communicate with the F -35A is suitable.