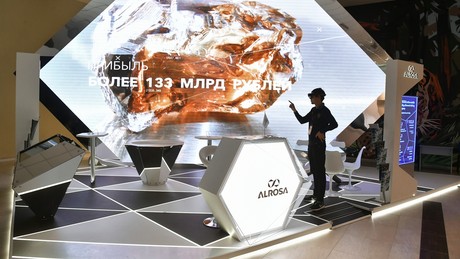 The United States has imposed another set of sanctions on Moscow. This time state-owned companies are targeted. Among those affected is one of the world’s largest mining companies and Russia’s leading shipbuilder.

On Thursday, the US Treasury and State Departments announced new sanctions against Russia. The embargoes would affect the Russian mining company Alrosa and the United Shipbuilding Corporation, it said. Brian Nelson, Undersecretary for Terrorism and Financial Intelligence at the US Treasury Department, stated:

“These sanctions will continue to put pressure on the key players enabling and financing Russia’s unprovoked war.”

Efforts to “restrict the Kremlin’s access to assets” would continue, Nelson said.

In terms of volume, Alrosa is the world’s largest diamond producer and accounts for about 90 percent of Russia’s capacity. Last year alone, the company’s exports totaled more than $4.5 billion. The company has already been named as a potential sanctions candidate under a US regulation issued just over a year ago.

The United Shipbuilding Corporation, which is said to build “almost all Russian warships,” has been sanctioned separately by the US State Department, along with 28 subsidiaries and eight people on the company’s board.

As a result, all U.S.-located properties belonging to the two companies and their subsidiaries will be confiscated, the U.S. Treasury Department said. It has been noted that US citizens are not permitted to do business with the companies concerned.

The measures follow a series of previously imposed sanctions recently imposed on Moscow by the US government and a number of Western allies. These aim to “paralyze and isolate Russia’s economy”.

On Thursday, the European Union voted for a complete embargo on Russian energy supplies. The proposal was approved by an overwhelming majority of 513 votes to 22, with 19 abstentions. However, the non-binding resolution allows EU member states to circumvent the sanctions. In particular, countries that remain dependent on oil, gas or coal from Russia could make use of this.

Washington had also imposed a total ban on imports of coal, gas and oil from Russia, with the White House declaring that the US should “reduce its collective dependence on Russian energy and increase pressure on Russian President Vladimir Putin”. On Thursday, US Senators approved the embargo in two separate votes.