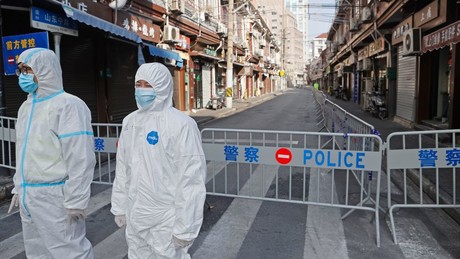 Shanghai has been in complete lockdown since April 1, with 8,000 documented corona cases in the metropolis of 26 million people. The measures are radical. Residents are currently only allowed to leave their homes for COVID-19 testing.

In early April, China reported the registration of a new omicron subtype derived from the main subvariant BA.1.1. should have developed. As in the previous corona waves, the state reacted immediately with the so-called zero-Covid strategy, which means shutting down all social life. Part of the measures is, on the one hand, the obligation of all citizens of an affected region to have regular PCR tests carried out and, on the other hand, the ban on leaving the apartment or house. Those affected are supplied with food by authorities or delivery services.

According to the authorities, there are currently almost 26,000 new cases across China registered, with a total of 1.4 billion inhabitants. However, no deaths were reported. According to the authorities, the center of the current wave, with almost 70 percent of the new findings, is in the greater Shanghai area. As of April 6, 19,660 new asymptomatic coronavirus cases and 322 new symptomatic cases were reported, according to the Message the local government. Nevertheless, the authorities continue to order the continuation of mass tests for all 26.3 million inhabitants. In addition, the city is brought to a standstill as part of the total lockdown.

“Shanghai – China’s most populous city – is on an indefinite lockdown due to a surge in COVID cases.”

The daily life of the people is becoming a serious challenge, if not an ordeal, due to the immense effects on a psychological and physical level. Residents who oppose the measures face penalties. “Shanghai epidemic prevention and control is at its most difficult and critical stage,” said Wu Qianyu, an official with the city health commission briefing. For Western understanding, the catalog of measures is radical in its demands.

On Monday was after media details announced by the official authorities that children who have tested positive must be kept separate from their parents. Eventually, after protests, the Shanghai municipal government announced that uninfected parents could apply to accompany children in need of support into isolation. According to the dpa, it remained unclear whether the regulation was only limited to children who needed special care.

Chinese corona policy stipulates that every citizen who tests positive is taken to a central quarantine facility. In addition to the exhibition halls in Pudong, a district of Shanghai, where 15,000 people can be accommodated, the national exhibition center is now also to be converted into a temporary quarantine camp for another 40,000 people:

“Introduction to Shanghai’s isolation center in Pudong (where all positive local cases are isolated). This is located in the famous Pudong World Expo Center – a 200,000 square meter hall…”

However, due to the measures, the local supermarkets and wholesale markets have not yet been able to resume operations. The distribution capacity of e-commerce platforms has also apparently fallen. This in turn has meant that the residents cannot be supplied with the food they need and the necessities of daily life information by Global Times China.

Posts documenting the seemingly dystopian measures are piling up on social media:

The population is locked up in fenced blocks of flats for an indefinite period of time. Nobody is allowed in front of the door. Robots patrolling the streets announcing the rules. pic.twitter.com/N5efKroOUK

“Seen on Weibo (China’s largest short message service): Shanghai residents take to their balconies to sing and protest the lack of supplies. A drone appears: ‘Please comply with government restrictions. Control your cravings Soul for freedom. Don’t open the window and don’t sing.'”

As seen on Weibo: Shanghai residents go to their balconies to sing & protest lack of supplies. A drone appears: “Please comply with covid restrictions. Control your soul’s desire for freedom. Don’t open the window or sing.” https://t.co/0ZTc8fznaVpic.twitter.com/pAnEGOLBIh

“The main thoroughfare in Pudong, Shanghai. Hundreds of cars would normally speed by here. This video was taken at 2 p.m. local time on Friday, April 8.”

The main avenue in Pudong, Shanghai. Usually, there would be hundreds of cars whizzing by…Recorded this video Friday, April 8, 2pm local time. pic.twitter.com/wfyXMrSXlE

And here is another video from the Chinese capital Beijing, from January 2022. At that time, a drone informed the residents of a block of flats about the current measures as follows:

“This community is now under lockdown! When it’s your turn to take the daily mandatory Covid test, take your ID card and go down the stairs for the test immediately! Otherwise, stay in your room!”

Beijingomicron arrived.Loudspeaker on the drone saying” This community is in lockdown now! When it’s your turn to do daily mandatory covid test, take your ID card and go down stairs to test immediately! Otherwise stay in your room!”2022/1/15 pic.twitter.com/0iqvcoBRcv