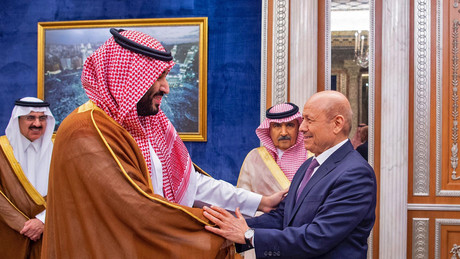 In his first televised speech, the new Yemeni Council President declared that he would end the war in Yemen, which has been going on for seven years, through a peace process. The Saudi Crown Prince Mohammed bin Salman has long wanted to end the bloody war in Yemen and thus put an end to the massive Houthi attacks on Saudi targets.

The head of Yemen’s new presidential council, Rashad al-Alimi, said in his first public speech on Friday that he would end the seven-year war through a peace process. “The Presidential Council promises the people to end the war and achieve peace through a comprehensive peace process,” Al-Alimi said in the televised address.

Saudi Crown Prince Mohammed bin Salman received Al-Alimi in Riyadh on Thursday after Yemeni “President” Abed Rabbo Mansur Hadi, who has lived in Saudi Arabia for years, ousted himself and handed over his leadership to a presidential council. Bin Salman said Yemen could start a “new chapter” with Al-Alimi.

“The real legitimacy in Yemen rests with those who defend the country’s independence, and the Presidential Council is an extension of the occupation and has no basis of legitimacy whatsoever,”

meanwhile, the Ansarullah movement (Houthi) declared as the first reaction to Hadi’s resignation and regarding the establishment of the Presidential Council in Riyadh.

The Yemeni nation does not take seriously the talks sponsored by illegal parties. The only option for the Saudi-led peace-promoting coalition is to cease attacks on Yemen, lift its siege and withdraw its forces, Ansarullah spokesman Mohammed Abdulsalam said on Friday.

Abdulsalam responded to the formation of the Presidential Council by calling the move a “farce” and a “desperate attempt to restructure the ranks of the mercenaries in order to push them to escalate further.”

The move initiated by Saudi Arabia to form the new Presidential Council aims to have the Arab war coalition reopen negotiations with the Houthis to settle the conflict in Yemen. The question is whether the council will be able to put the internal divisions aside for the time being. The composition of the new council already suggests that new conflicts are in the air. Especially since there is bitter hostility between some of the actors who have now come together there.