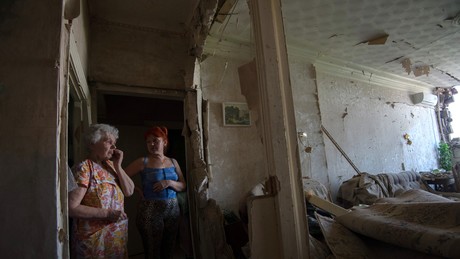 Is that the attack on the Gleiwitz transmitter? In any case, it is clear that the German media has completely abandoned its scruples in reporting on the rocket attack on the Kramatorsk train station. Above all, any effort to adhere even remotely to the truth. They would still fabricate a Russian attack if it were a US missile.

So far, however, the Ukrainian military has not. But what it demonstrably not only has, but has already used in many cases, including, as a few weeks ago in Donetsk, specifically against the civilian population, is the Totschka-U. A rocket that was put into service by the Soviet armed forces in 1976, 45 years ago, and which the Russians have long since replaced with newer models.

Doesn’t matter. If Ukraine claims it’s a Russian missile, then we believe it. If they first claim it’s one Iskanderrocket, but then the photos appear that clearly show the remains of a Totschka-U, then the Russians just fired a rocket that they no longer have.

A city that was one of the centers of the Donbass uprising in 2014 and resisted capture by Ukrainian troops for months. whose residents had voted overwhelmingly for autonomy. Who suffered from Ukrainian shelling just like the residents of Slavyansk. So not just any city in the Donbass, but one in which the People’s Republic of Donetsk will probably put up a sign at the entrance to the city after liberation with the inscription “Hero’s City”. Sure, exactly the target that the Russian troops will seek. With the most inaccurate missile in the arsenal, as if they had no other.

Not to forget: The rocket was inscribed “For the children”. Written in Russian because there is no Ukrainian “i” at the end of the word children… Exactly this inscription already existed in the Donbass war, but on Ukrainian shells. Conversely, it may be that people paint “for the dill,” more often “for the victory,” but this kind of cynicism, aiming rockets at civilians and writing “for the children” on the shell, is more a Ukrainian flavor . Consider the speech by former Ukrainian President Petro Poroshenko, in which he told Donbass residents: “And our children will go to school, and your children will sit in the basements.”

According to the Frankfurter Rundschau, which sees at least half a thought as necessary, the Russian Ministry of Defense reported in the morning that it had fired on three train stations in the Donbass. right, the Report there really is. It reads: “High-precision air-to-surface missiles in the Donetsk region destroyed weapons and military equipment that arrived in the Donbass, at the Pokrovsk, Slavyansk and Barvenkovo ​​railway stations.” We’re talking about air-to-surface guided missiles here. The Tochka-U is a surface-to-surface ballistic missile. A small technical difference. But you probably don’t have to consider that when you’re in the process of constructing the next Russian crime.

But a later one is interesting Message, also from the Russian Defense Ministry. “According to confirmed information, the attack on the Kramatorsk railway station by the missile division of the Ukrainian armed forces took place from the Dobropole region, 45 kilometers south-west of the city.” The people of Frankfurt should have read this statement as well or, even better, understood it. With the phrase “confirmed information” one can assume that the Russian Ministry of Defense has satellite images showing the transport truck with the missile (and possibly also without the missile after the launch). Unlike the Americans, who like to babble about “insights from the intelligence community” without ever producing a shred of paper, let alone a picture, that proves something, the Russians tick differently. If they even suggest they have something, they have it.

No, there is no need to think. That was the Russians. We have to answer hard. So the FDP defense politician Marie-Agnes Strack-Zimmermann, who is visibly in the starting blocks to succeed Christine Lambrecht:

In the case of a Russian missile attack on the train station #Kramatorsk 30 people were cruelly killed and 100 people injured who just wanted to leave. It must finally be clear to everyone involved that Dtld must be ready for much more. #Bucha otherwise it was just the beginning.

For what reason? To the next march on Moscow? Or to maybe gouge out your eye after the economic knee shot? And all this so that a worn-out kleptocracy is still available as an ally of the West?

It gets really exciting when you look at who has what motivation for what. The circumstances are quite interesting. EU Commission President Ursula von der Leyen is in Kyiv (at least supposedly, I don’t think she’s really moving her precious body there, she just wants to meet Vladimir Zelenskiy anyway, who should also be somewhere else), and on Sunday there are presidential elections in France . An interesting side detail is that the first report on the spot came from an AFP reporter, just like in Butscha. And the message from AFP writes immediately attributed the attack to Russia and then quoted Zelensky as saying: “This is the limitless evil. And if it is not punished, it will never stop.”

But back to France. Sunday is the first round of the presidential election and it seems pretty clear that Macron will make it to the runoff, but it’s not yet clear whether his opponent is Jean-Luc Mélenchon or Marine Le Pen. Only one fact is quite clear: Both possible opponents emphasize French sovereignty and are critical of the EU and NATO. And Macron is so hated that no more demonization of his opponent will prevent the respective electorate from voting primarily against Macron in the next round.

Should Macron disappear, it is conceivable that France will exit the sanctions carousel and pursue a different policy towards Russia in its own sovereign interest. The next French President will take office on May 13; after that, the West, so dutifully united behind Joe Biden, could fall apart in no time at all. The interest in supporting Macron is immense. A rediscovery of Western European sovereignty would be the last thing the US needs.

And Zelensky? He knows very well that the liberation of Mariupol is nearing completion and that the next step is very likely to be the complete liberation of Donbass, which only the encircled Ukrainian troops still stand in the way of. Which are not nearly as easy to hide between residential buildings as Azov in Mariupol, because there are mainly smaller towns with a lot of flat land in between. The troops of the People’s Republics in particular should be highly motivated to finally get rid of this military, which has terrorized their cities with shelling for eight years. Zelensky knows that his side is running out of fuel, ammunition, food and water; that the end of these units is actually an established fact that will come about sooner or later.

The only way he could save them was to turn the small war in Ukraine into a big one. And how can he? At most through a massive attack in the information war. By in turn pressuring his western allies to intervene to save his troops from Donetsk and Lugansk. Because militarily there has long been no way to improve their situation.

Is that enough reason to assassinate Ukrainian citizens with a Ukrainian missile? Well, in the eyes of Kiev, people in the Donbass are known to be “non-humans”, those citizens of whom there are too many, whose children are supposed to grow up in the cellars and who are called “potato beetles”, insects to be destroyed. Perhaps there would be reluctance to launch one’s own missiles at Lvov, but Kramatorsk? It was bombed mercilessly in 2014.

Of course, this was just as little reported in the West as the whole Donbass war. But that doesn’t mean that the political and military leaders of this West don’t know. You know exactly what happened there. You also know about the Ukrainian attack in Donetsk in mid-March. They just don’t say it and pretend to their own population that everything is completely different.

In fact, the available facts more than suggest that they should now be talking about a Ukrainian crime against their own people. They would have to turn away in horror from a government that has no qualms about sacrificing its own citizens for a journalistic advantage.

But one can place bets on the fact that, as demonstrated by Strack-Zimmermann, they will unanimously express their abhorrence of Russia and, instead of putting a stop to the Kiev criminals, will continue to contribute to the prolongation of these crimes themselves. And in doing so, they continue to up the ante they demand of their own citizens.

The Ukrainian missile division, which the Russian Defense Ministry has named as the sender of this missile, is likely to be held accountable very soon. But at some point the time will come when those in command will no longer escape their guilt, as will their willing helpers in the editorial offices, who sell every Ukrainian lie, no matter how transparent, as truth.

On June 2, 2014, when the Ukrainian air force had flown an attack on the regional administration in Lugansk and several people bled to death from shrapnel on the street in front of it, the German newspapers simply dismissed the Ukrainian claim that rebels accidentally got an air conditioner with a Manpad met. A day later, the people of Kiev had to admit that they were rockets from a Ukrainian plane. This admission was not even passed on anymore.

Back then it was all about sincerity. About bringing justice to the victims in Donbass. For journalistic decency. Today the geopolitical game is in hyperdrive and the fate of Europe depends on the question of truth or lies. Anyone who is now looking for band-aids to sell what looks to me like a Ukrainian staging as a Russian attack, or uses this story as an occasion for further warmongering against Russia, is not only indecent. He is involved in a crime against humanity. And there will be a reckoning for that too. It’s not the West of values, it’s the peoples of the world who will demand it.