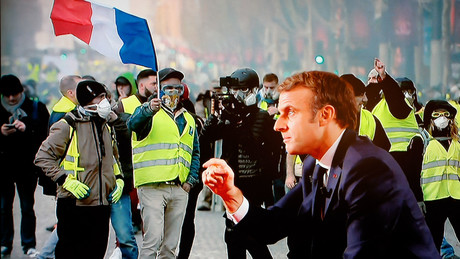 An analysis by Rachel Marsden

The French will go to the polls on Sunday, April 10, in the first of two rounds of the country’s presidential election. This time it’s no longer about “right versus left”. In this election, the establishment’s globalist straitjackets are pitted against true democracy and independence. The outcome has the potential to unleash a political earthquake not just in France but across Europe, and deal a severe blow to the globalists’ “rules-based order.” But will French voters seize this opportunity?

There has long been a view that right-wing candidate Marine Le Pen can never win against an establishment candidate – in this case, incumbent President Emmanuel Macron. Traditionally, French voters who support the maintenance of social safety nets – something Le Pen also supports, by the way – have leaned to the left. In the meantime, however, those voters who seek stronger state protection from the increasingly aggressive globalist exploitation, and who have so far tended to support the established candidates of the bourgeois right-wing parties, have switched sides.

Current French President Emmanuel Macron moved into the Élysée Palace in 2017, allowing himself to position himself as a propagandist of “smart globalization”. Although he had served as Minister of Economy, Industry and Digital Affairs under Socialist President François Hollande, he resigned from that post to prepare for his first candidacy for the presidency, describing himself as “neither right nor left” and as a candidate of the “non-establishment”. He formed his own party and cobbled together a coalition of establishment figures from right to left, creating the illusion of an unconventional anti-establishment coalition.

Macron said in an interview with the Financial Times in April 2020 that globalization has reached the end of its cycle and is undermining democracy. But when push came to shove, and words turned into deeds, he captivated France with every conceivable globalist initiative.

Macron had five years to tip the scales and take positions in favor of French citizens. Instead, he blindly followed US-dominated positions against Russia, against Iran, against China and other traditional US adversaries. Macron’s leadership weakness has undermined French industry’s ability to make bilateral decisions in its own best interest. At the same time, his economic policies have increased the cost of living for the average French citizen. Now, at the end of his term, Macron is trying to convince the French that they are better off today than they were before he took office.

Macron also had a choice about how to deal with the COVID crisis. Not surprisingly, in doing so, he once again trod the path of globalism. He tightened measures against the pandemic, resulting in French workers losing their livelihoods due to COVID-19 vaccination requirements. Macron took the same approach championed by virtually the entire Western establishment, according to a French Senate report advised by major global private consultancies amid the health crisis and costing billions of euros in public funds. And while we don’t know the details of these private consulting contracts and what was agreed upon behind closed doors, we see the end result: Digital passports that document vaccination status and enable digital personal identification; a procedure that can be imposed anytime, anywhere at the whim of the President, under a never-ending “state of emergency.”

Firms with a global reach, employing former senior government officials and representing both multinational and government clients, are able to build entire systems of government at taxpayer expense for the benefit of their private clients. For example, imagine a big pharma customer’s “poke” coupled with a big tech customer’s digital identification and made mandatory within a globally harmonized taxpayer-funded system. Under Macron, these irresponsible “brokers” and “benefactors” of globalization have firmly attached themselves to the public purse.

In every crisis France has faced during his tenure, Macron has failed to show his country an independent path. Now the French are paying a price for it. This makes it understandable why some polls are predicting a neck-and-neck race between Macron and Le Pen in the second ballot on April 24.

Looking more closely at recent survey data from late March and early April, two trends support this observation. First, the initially weak non-establishment far left, represented by Jean-Luc Mélenchon, has gained significant ground at the expense of the left establishment. Second, grassroots support for Valérie Pécresse of the Republican Party, which once described itself as a mixture of Angela Merkel and Hillary Clinton, has clearly shifted to Le Pen. Among their traditional right-wing establishment supporters, Pécresse has fallen from a peak of 44 percent in early March to 29 percent today, according to an IPSOS poll, while support for Le Pen has risen from 3 percent to 17 percent over the same period.

It is significant that both Le Pen and Mélenchon share a common desire to take France out of NATO and achieve greater independence for member states within the EU. It is difficult to overestimate the impact that a truly independent France would have on these institutions of globalization.

The dynamics of these final hours before the election point to an anti-establishment shift as French citizens begin to feel the costs of this globalization in their everyday lives.

We are no longer in the realm of abstract ideological debates. Rather, we are confronted with an existential choice, either to remain under the same “rules-based order” hailed by the globalist elites, which increasingly lowers our living standards and relentlessly fuels conflict and chaos in the world; or get off this masochistic roller coaster altogether.

Macron has had five years to become wise to send a resounding no to the special interests that systematically plague Western democracies. But Macron failed, not to say he compounded the problems. The election of France’s next president will determine whether French voters finally have enough of a farce that routinely votes against their own interests.

Rachel Marsden is a columnist, political strategist and presenter of an independently produced French language program airing on Sputnik France. Your posts are on the site rachelmarsden.com to find.