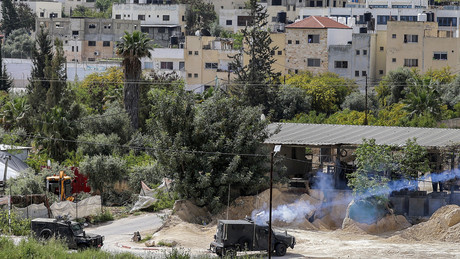 After a deadly attack in Tel Aviv, the Israeli army is said to have killed a Palestinian during an operation in the Jenin refugee camp. Local mosques used their loudspeaker systems on Saturday to call on residents to fight against Israel.

After a deadly attack in Tel Aviv, the Israeli army is said to have killed a young man during an operation in the Palestinian refugee camp Jenin. Five other people were injured, the Palestinian health authority said on Saturday.

Palestinian media identified the dead Palestinian as Ahmed Al-Saadi. According to initial reports, he was a member of the Palestinian Islamic Jihad (PIJ). Jenin is considered a stronghold of armed Palestinian groups in the north of the Israeli-occupied West Bank.

On Thursday, a Palestinian attacker named Raad Hazem shot and killed three Israelis in a busy Tel Aviv neighborhood. The 28-year-old attacker was shot dead after hours of searching. It was the fourth attack in Israel in just over two weeks. Since March 22, a total of 14 Jewish Israelis had been killed by Arab Israelis and Palestinians from the West Bank.

Heavy gun battles between Palestinian militants and Israeli Defense Forces (IDF) forces were reported in the refugee camp on Saturday. The IDF are said to have surrounded a compound belonging to the family of the Palestinian attacker who carried out a deadly attack in central Te Aviv on Thursday. As is usual in such cases, the attacker’s family home is likely to be destroyed soon. However, it is questionable whether such measures really contribute to deterrence, as the Israeli government in Tel Aviv always claims. On the contrary, they could increase tensions.

Local mosques used their loudspeaker systems on Saturday to call on residents in Jenin to take part in the fight against the Israeli occupiers, videos in Palestinian media show.

Israel’s domestic intelligence service, the Shin Bet, said on Friday that the suspected Tel Aviv assassin had no clear links to Palestinian armed organizations. However, both Hamas in the Gaza Strip and members of the Palestinian al-Aqsa Brigades in Jenin praised the attack. The al-Aqsa Brigades are the military arm of Palestinian President Mahmoud Abbas’ Fatah.

For months, Israel had been warned of another bloody Ramadan after serious unrest and a gun battle between Israel and Hamas in the Gaza Strip last May. Ahead of the month of fasting, Israel and the Israeli-occupied Palestinian territories are now experiencing a new wave of violence.