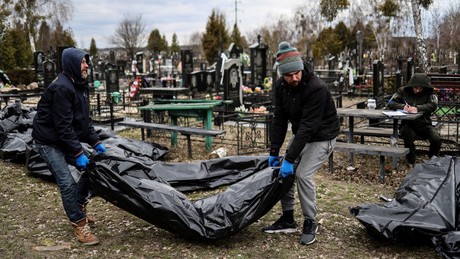 “In war, the truth dies first.” This quote will Aeschylus attributed, a Greek tragic poet from the 6th century BC. known for his “extensive use of imagery, mythical allusion, sublime language, wordplay, and riddles.” It is therefore only fitting that a quote from the man who first formulated the concept of all modern war propaganda should come to life in contemporary Ukraine. The government in Kyiv and its Western advisers for waging information warfare have probably made use of all of Aeschylus’ dramaturgical means to stage a modern tragedy in the Ukrainian city of Bucha. And this tragedy reveals that the concept of lying is not just a by-product, but can also be used as a weapon of war.

The main source of the reports on the Bucha tragedy is a video taken by the National Police of Ukraine showing one of their convoys driving through a city street. About a dozen bodies lie on the road, many of them appear to have been tied up. This video went viral, sparking a pandemic of fear and anger that has gripped much of the world and has drawn the attention of world leaders and the head of the Catholic Church. This, in turn, has led to a spate of condemnation and outrage against Russia and its President Vladimir Putin. The causal link between the video and the global scandal is clear: the former could not exist without the latter.

One of the first lessons in objectivity is to slow things down to make sure emotions aren’t clouding the facts. Butscha’s video recordings are disturbing. It appears that the video was released in its current form with the express intention of inducing a deep “shock” in the viewer. If this is indeed the case, then those who published it – the National Police of Ukraine – have exceeded their wildest expectations. Or her advisers, if that was the case.

The connection between the dead and the Russian military was made immediately, without any factual data to back it up. And it was subsequently picked up across all media, both mainstream and social media. Anyone who dared challenge the established “Russia did it” narrative was shouted down and dismissed as a “Russian stooge” or worse.

That these conclusions are the by-product of mass hysteria is beside the point – why try to be objective when the narrative fits every stereotype previously painstakingly pieced together by the same people parroting the Bucha story today? Socially “preconditioning” an audience unaccustomed to critical thinking is an essential step in getting that audience to take whatever is put in front of them at face value. Regardless of how outrageously the facts of the story strain credibility. And to be clear: the Ukrainian account of the events in Bucha does not look very credible.

The chronology of the narrative is a first indication that the story spread by Ukraine and picked up in the West is not what it seems. It has been proven that on March 30 Russian troops withdrew from Bucha. The Ukrainian national police began entering Bucha on March 31, and the same day the mayor announced that the city was under full control of the Ukrainian authorities.

Neither the mayor nor any other Ukrainian representative ever pointed to mass killings by Russia. The video in question was declassified by Ukrainian authorities on April 2; it is not certain if the video was taken earlier or on this day. What is certain is that the images shown on the video differ significantly from the original depiction of the mayor.

Russia has vehemently denied the allegations and a Emergency UN Security Council meeting requestedto discuss what the Russian Foreign Ministry described as “criminal provocations by Ukrainian soldiers and radicals” in Bucha. Great Britain holds the presidency of the Security Council. And the British mission to the United Nations has rejected the Russian request on the grounds that a discussion on Ukraine scheduled for Tuesday April 5 would serve as a forum for any discussion on Bucha.

One would think that the Security Council, which in the past has shown its willingness to convene at short notice to discuss events in Ukraine, would try to accede to Russia’s request on a matter of such importance. The British aim, however, does not appear to be a quick search for truth and justice, but rather to buy time for the political fallout from the alleged massacre in Bucha to unfold.

An example of this tactic is US President Joe Biden’s response. “You saw what happened in Bucha”, he told reporters and added that Russian President Vladimir Putin is “a war criminal”. Biden used the Bucha crisis to advocate for more arms being sent to Ukraine. “We must continue to provide Ukraine with the weapons it needs to continue the fight,” he said. “And we have to gather all the details so that there can be a war crimes tribunal.”

All this is said by the President of a country that refuses to recognize the International Criminal Court. For reasons that should be obvious to anyone willing to think critically.

Lucky for President Biden and the Ukrainian government announced in early March 2022 Britain’s Chief Prosecutor at the Court, Karim Khan, has announced that he has launched an investigation into alleged war crimes and crimes against humanity being committed in Ukraine. Given the drastic allegations against Bucha, one would assume that Khan sent a forensic team. To secure the crime scene and monitor victims’ autopsies to determine the time and manner of death and whether the victims died where they were allegedly found or if their bodies were brought there from another location became.

Khan would also be authorized to hold talks with Ukraine’s National Police, which has a history of close ties with members of Ukraine’s far right, including the notorious Azov Battalion. Of particular interest would be an examination of the orders given to the police regarding the treatment of those Ukrainian civilians believed to have collaborated with the Russian military during the Buchan occupation.

The results of such an investigation would most likely contradict the narrative pursued by the Ukrainian government and picked up by compliant media and politicians in the West. This is the main reason why Khan is currently not on site in Bucha. It is expected that the Ukrainian National Police will manipulate the evidence relating to the Bucha killings in such a way that it will be virtually impossible to disprove the allegations if, or if, Khan ever gains access to it.

The truth of what happened in Bucha is out there, waiting to be revealed. Unfortunately, this truth seems inconvenient to those able to vigorously pursue it through an on-site forensic investigation.

In the end, if it turns out that the Ukrainian National Police murdered Ukrainian civilians for allegedly collaborating with the Russians during the brief occupation of Bucha, and if the forces of international law were to be used against the real perpetrators of this crime, then any true Law enforcement involving both the US and UK governments as knowing complicity in a crime.

Translated from the English

Scott Ritter is a former US Marines reconnaissance officer and author of “SCORPION KING: America’s Suicidal Embrace of Nuclear Weapons from FDR to Trump”. He served the US in the Soviet Union as Inspector for Implementation of the requirements of the INF Treaty, during the Second Gulf War on the staff of General Norman Schwarzkopf and thereafter from 1991 to 1998 as Chief Weapons Inspector at the UN in Iraq Ritter currently writes on topics relating to international security, military affairs, Russia and the Middle East, and arms control and non-proliferation You can follow him on Twitter at @RealScottRitter follow.