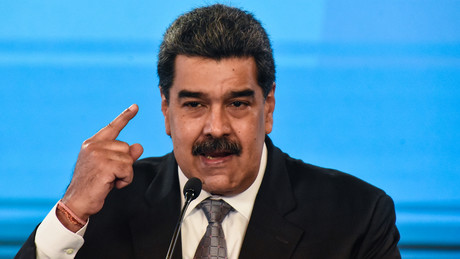 Venezuela’s President Nicolás Maduro has denounced attempts to start “a major war” with Moscow. The West wants a war to “dismember” Russia and end hopes for a multipolar world.

Venezuelan President Nicolás Maduro has accused the West of wanting to “dismember” Russia while sweeping sanctions were imposed on Moscow over the Ukraine war. Venezuela has been living under extensive US embargoes since 2019.

“You introduce yourself [im Westen] economically, politically and diplomatically for a major war against Russia. We denounce it from Venezuela,” Maduro said in a televised address on Friday.

“They want a war to dismember Russia, rip it to pieces and end hope for a multipolar world in which we can all live.”

The United States had imposed several rounds of sanctions on Venezuela, affecting the country’s oil industry, among other things. Washington had openly supported Maduro’s political opponent, Juan Guaidó, while Maduro had accused the West of wanting to oust him from power.

Many countries, including NATO and EU member states, imposed sanctions on Moscow in response to its military action in Ukraine. Moscow attacked the neighboring state in late February after Ukraine failed to implement the Minsk agreements signed in 2014 and Russia eventually recognized the Donbass republics of Donetsk and Lugansk. The Minsk Protocol, mediated by Germany and France, was intended to give the breakaway regions a special status within the Ukrainian state.

Russia has since demanded that Ukraine officially declare itself a neutral country that will never join the US-led NATO military bloc. Kyiv insists the Russian offensive was entirely unprovoked and has dismissed claims that it planned to retake the two republics by force.