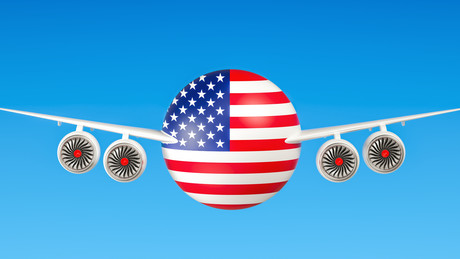 With energy prices likely to continue rising into the peak summer travel season, bizarre twists in the conventional behavior of western governments and corporations are to be expected. Such as airlines that offer buses instead of connecting flights.

Due to the sanctions imposed on Russia, diesel prices continue to rise worldwide. The trend tempts companies to come up with some very bizarre solutions. In America, the first airline is now offering bus services instead of connecting flights, as the price of kerosene, a component of diesel fuel, which is needed to refuel airplanes, has also skyrocketed.

As the American news agency Associated Press (AP) reported, American Airlines is in the process of expanding its route network to and from Philadelphia with a new bus service that will connect the airline’s hub with two other airports in the region. From June, the company would like to offer bus connections between Philadelphia International Airport and the two US airports in Lehigh Valley and Atlantic City instead of connecting flights.

Passengers traveling to or from Philadelphia, Allentown or Atlantic City can use US Travel Magazine The Points Guy According to the airline, people will continue to book normal connecting flights with the airline, but in future they will take a bus instead of an airplane to their destination. Baggage would be automatically reloaded, according to The Points Guy. The buses will be equipped with 35 leather seats, free internet access, streaming options and power outlets.

American Airlines’ bus service will offer three daily round-trip trips between the US metropolises of Atlantic City and Philadelphia and two daily trips to and from Allentown. According to information from The Points Guy, tickets will go on sale as early as Monday. The airline is planning the first trips for June 3rd.

The new service should make it easier for passengers to travel between airports, a spokesman for American Airlines said opposite to the US newspaper Philly Voice. Experts | of the aviation magazine Airline Weekly, however, see the step taken by the US company as an attempt to compensate for the shortage of pilots due to the US government’s coercive corona measures and the higher diesel prices, which in turn are the result of a failed US policy against Russia. These two factors in particular would force US airlines to find more cost-effective travel options for their passengers.

Staff shortages and soaring diesel prices are already having a serious impact on the US carrier’s earnings expectations. The airline has already been forced to suspend dozens of routes operated by regional subsidiaries this spring and summer due to staff shortages.