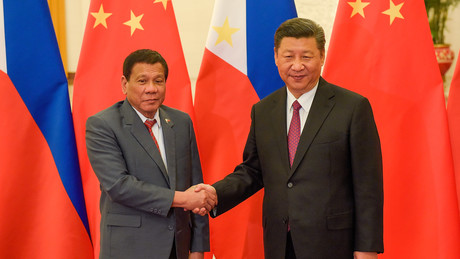 As Philippine President Rodrigo Duterte prepares to step down, regional leaders have called for calm in the South China Sea.

“The leaders stressed the need to make every effort to maintain peace, security and stability in the South China Sea by exercising restraint, reducing tensions and working on a mutually acceptable framework for workable cooperation,” Dutertes said office in a statement. It added that the leaders of both nations stand ready to “broaden the space for positive engagement” despite the existing disputes.

The Philippines clashed with China last month over a Chinese Coast Guard ship allegedly conducting “close-up maneuvers” in the South China Sea. The Philippines claimed the ship’s activities increased the risk of a collision. This was the latest of 200 diplomatic protests launched by Manila over its neighbor’s activities in the disputed waterway. Both countries claim rights to the South China Sea, a lucrative trade route through which $3 trillion flows annually. The dispute has been ongoing since an international arbitration court invalidated China’s exclusive claims to the waterway in 2016.

During their virtual summit on Friday, the two leaders also discussed the need for a peaceful solution to the war in Ukraine and pledged to work together to tackle climate change issues.

Xi warmly welcomed the two countries’ handling of their disputes in the South China Sea, stating that “regional security cannot be achieved by strengthening military alliances,” according to the Xinhua News Agency.

However, Manila has previously said it could open its facilities to US use should the war in Ukraine turn into a global conflict.

The Philippines has also strengthened its alliance with Japan and intensified joint exercises and defense cooperation. In a joint statement on Saturday, both countries opposed “acts that could increase tensions” in the East and South China Seas and condemned Russia’s “aggression” in Ukraine, which affects not only Europe but Asia as well.

Duterte, who was elected president in 2016, is scheduled to step down later this year. He has pursued a policy of rapprochement with Beijing, relenting in exchange for billions of dollars in investment pledges, loans and aid in territorial disputes.