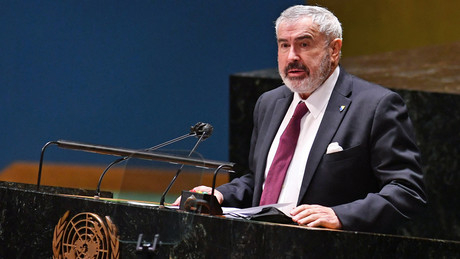 Bosnia and Herzegovina (BiH) — a trinational state formed in the former Yugoslavia consisting of two entities and three constituent peoples, last Thursday voted to suspend Russia from the UN Human Rights Council. This led to massive internal tensions and even a criminal complaint against the Bosnian ambassador to the UN.

It wouldn’t be strange, of course, if the UN ambassador of that country, Sven Alkalaj, whose constitution requires everything to be based on consensus, had received approval for his actions. However, only the three-member Presidium decides on Bosnia and Herzegovina’s foreign policy (and had no unified position on this because the Republic of Srpska “is against”). So the question arises as to who the said diplomat cast his vote for, further fueling inter-ethnic tensions.

Of course, his vote against Russia triggered a storm of public reactions, especially since his boss, Foreign Minister Bisera Turković, had announced such a possibility in advance on her private Facebook profile.

Instead of working to defuse tensions, the controversial voice against Russia was immediately welcomed by the head of the EU delegation to Bosnia and Herzegovina, Ambassador Johann Sattler: He thanked Turković for BiH “choosing the right side and supporting those positions condemning violations of Ukraine’s sovereignty and violations of international law.”

Russia had previously warned UN member states that a “for” or abstention vote in Moscow would be considered a hostile gesture with consequences for bilateral relations. However, this warning was obviously taken lightly. So that Minister Turković, in agreement with the authorities in Sarajevo, made an illegal and illegitimate decision that was not based on the consensus of the three constituent peoples – Serbs, Croats and Bosniaks.

The minister is a member of the party of the late Muslim war leader Alija Izetbegović. He is seen by many in the Balkans as responsible for the bloody ethnic, religious or political wars of the 1990s. Turković has often appeared as a “solo player” on the international stage, which is why her recall was often called for.

The Serbian member of the three-man presidency, Milorad Dodik, warned on Thursday. The politician distanced himself from the controversial vote, pointing out that the BiH Presidency is solely responsible for foreign policy. The public is also confused and concerned about this arbitrary gesture. For it negatively affects internal inter-ethnic relations and leaves citizens in a position to wonder what the ultimate goal of this plan is.

It is clear that the pressure from Brussels and Washington was crucial – not only for that country but also for other Balkan countries that also voted to suspend Russia. The voice of Serbia was particularly surprising in this context. The country, contrary to the expectations of its citizens, voted for an act that “represents an attempt by the United States to maintain its dominant position and total control in order to continue the line of human rights colonialism in international relations,” said Russia’s UN Ambassador Gennady Kuzmin at the session of the UN General Assembly.

However, Serbia still maintains its intention not to impose sanctions on Russia and is very consistent in this sense. But Bosnia and Herzegovina, as a country fully dependent on Russian gas and whose subjectivity is endorsed by, among others, the Russian Federation as the guarantor of the Dayton peace accords, should be concerned.

At the same time, the country has not made any further progress towards Brussels and the promised and dreamed of EU membership.

Meanwhile, it has emerged that Serbian member of the BiH Presidency Milorad Dodik has filed criminal charges against Foreign Minister Bisera Turković and BiH Ambassador to the UN Sven Alkalaj. This is because they voted against Russia in the General Assembly.

More on the subject – Bosnia and Herzegovina: failed project or sovereign country with foreign support?