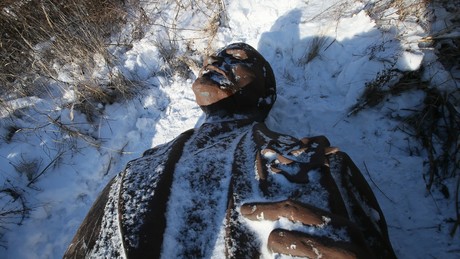 A new wave of Russophobia has begun in Ukraine. You have already fallen victim to Pushkin. Next, Kyiv plans to erase Tolstoy, Minsk and the heroes of Kiev’s liberation from German occupation, among others, from collective memory.

In view of the war in the country, the Kiev city administration wants to further “de-russify” the city. What this can mean in concrete terms was demonstrated a few days ago by the western Ukrainian city of Ternopol, which had a monument to the poet and playwright Alexander Pushkin torn down on Friday.

“The Pushkin monument was demolished in Ternopol.

“Everything Russian should be dismantled. This includes the monument to the Russian writer,” said the mayor.

I remember this monument, which they wanted to demolish after the Maidan, but at that time the city residents defended it. Now no one asked about it…”

Since 2014, hundreds of towns and thousands of streets in Ukraine have already changed their ancestral names in the course of “decommunization”, with the names of Ukrainian nationalists and Hitler collaborators often replacing the names of Soviet generals or Russian cities. Not only were all Lenin monuments in the country demolished, but also numerous memorials to Soviet soldiers and commemorative plaques to specific personalities such as Victory Marshal Georgy Zhukov.

Among other things, the Kiev city administration now wants to let off steam at five metro stations that, in their opinion, have names that are ideologically “unacceptable”.

Among these five stations is the station “Geroev Dnepra” (in English “Heroes of the Dnieper”), named in honor of the Soviet soldiers who died while forcing the Dnieper in the fall of 1943 and the subsequent liberation of Kiev from German occupation. These soldiers are no longer in demand as heroes, instead, according to the city administration, either the fighters of the nationalist Ukrainian Insurgent Army UPA, which collaborated with the German occupiers in World War II, should be honored as “heroes” or the nationalist Azov regiment as ” Heroes of Mariupol”.

According to the initiators, the reference to the Belarusian capital Minsk should no longer be acceptable. The station “Minskaya” is to be renamed in honor of the Polish capital Warsaw or Vyshgorod, a northern suburb of Kiev. Alternatively, the name of the old Lithuanian coat of arms revered by Belarusian nationalists could come into play.

For the same reason, the harmless “Berestejskaja” should disappear, because this name is reminiscent of the Belarusian border town of Brest. According to the will of the initiators, this should in future bear the name of the nationalist leader and Hitler collaborator Stepan Bandera.

There should be no place in the Kiev Metro for “friendship of peoples” in the future. The initiators want this name to fall in favor of the “unity of Ukraine”. Alternatively, local topographical designations such as “animal park” come into question.

The author of “War and Peace” (actually “War and the World”) and “Anna Karenina” Leo Tolstoy will probably disappear from the topography of the Kiev Metro. In the future, the metro station dedicated to him will either honor football coach Valery Lobanovsky or engineer Eugen Paton. However, both proposed names could violate the decommunization law, since Lobanovsky was coach of the Soviet national football team for many years and Eugen Paton worked in the USSR until 1953, among other things also building the first bridge over the Dnieper after the Second World War.

The “Decommunization Law” forbids honoring figures who served the “communist regime of the USSR”. Aware of this, the initiators of the renaming proposed a third name: Jewhen Tschykalenko. In the Russian Empire he was a patron of Ukrainian culture and a publisher. In 1919 he emigrated first to Vienna and then to Prague, where he died in 1929.

The first section of the Kiev Metro opened in 1960. At the end of the Soviet Union, the network had 34 stations. Since then, 16 stations have been renamed, with only 18 stations bearing their original names. Even traditional topographical designations such as “Red Square” have given way to new names over the past 30 years.