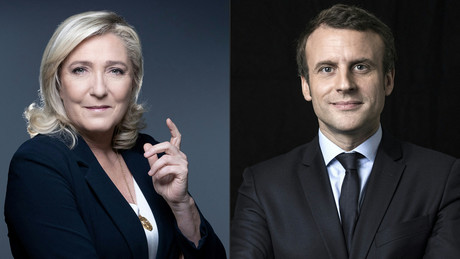 French President Emmanuel Macron and the right-wing conservative Marine Le Pen are contesting the runoff election for the highest office in France. According to initial projections, Macron is 28.6 percent, Le Pen 24.4 percent. For Conservatives and Socialists, the result is a debacle.

According to projections, incumbent head of state Emmanuel Macron is ahead in the first round of the French presidential election. The right-wing conservative Marine Le Pen follows in second place. As the broadcasters France 2 and TF1 reported on Sunday evening after the polling stations closed, the Liberal and his competitor from the Rassemblement National are moving into the run-off election on April 24th. Macron was ahead of Le Pen with 24.4 percent, according to TF1 with 28.6 percent. Jean-Luc Mélenchon followed with 20.2 percent, Éric Zemmour with 6.8 percent, Yannik Jadot with 4.6 percent and Valérie Pécresse with 4.6 percent. France 2 extrapolated Macron at 28.1 percent ahead of Le Pen at 23.3 percent.

Macron and Le Pen will now face off on April 24, a repeat of the 2017 runoff duel in which Le Pen ultimately lost to Macron. Polls predicted a much tighter outcome for this time. Again and again, the candidate who finished second in the first round won the run-off in the French presidential election.

A victory for the 53-year-old Le Pen would have serious consequences, especially for Berlin and Brussels, since Le Pen has been questioning political cooperation with Berlin for years and is more inclined to cooperate with EU skeptics. Unlike Macron, who is pro-EU, Le Pen could slow down the EU in certain areas.

Le Pen is competing for the third time. The long-time politician, who succeeded her father in the party leadership of the Rassemblement National (formerly: Front National), is committed, among other things, to restricting immigration and social benefits for foreigners. The 44-year-old Macron was barely visible during the election campaign. Macron, who relied on economic progress in the election campaign, managed to get into the Élysée Palace in 2017 with his movement La République en Marche. Before Macron became president, he worked as an investment banker, advised the previous president François Hollande and was economy minister under him from 2014 to 2016.

France’s former mainstream parties, the Socialists and Conservatives, suffered historic defeats in the first round of the presidential election. According to projections by broadcasters France 2 and TF1 on Sunday evening, the bourgeois-conservative party Les Républicains, with lead candidate Valérie Pécresse, received only 4.6 to 5 percent of the vote. The Socialists, who still held the presidency with Hollande from 2012 to 2017, fell to 1.9 to 2.1 percent.

More on the subject – “Strategy of redemonization”?: A runoff between Macron and Le Pen seems inevitable