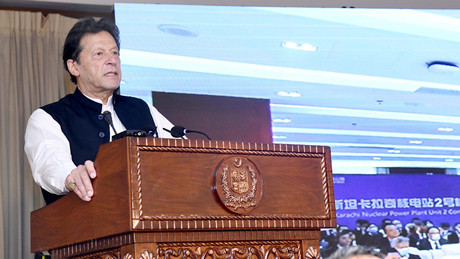 Imran Khan was stripped of confidence. He is the first Pakistani leader to be ousted by a no-confidence vote. Numerous members of the government and Khan himself spoke of US interference and a “foreign conspiracy” in this connection.

For the first time in Pakistan’s 75-year history, Parliament has voted no confidence in a prime minister. As a parliamentary speaker announced in the night from Saturday to Sunday (local time), 174 out of a total of 342 MPs voted against Pakistani Prime Minister Imran Khan in the eagerly awaited vote of no confidence, reports the dpa. Supporters of the ruling parties and Khans had previously left the hall. “This unity will rebuild Pakistan,” said opposition leader Shehbaz Sharif while thanking his supporters for their fight throughout the night.

After the vote, which was actually planned for just under a week ago, failed due to alleged unconstitutionality, the Supreme Court of Pakistan ordered another vote of no confidence in Khan and his government on Thursday. The subsequent dissolution of parliament by Pakistani President Arif Alvi was reversed with the court decision.

Parliament Speaker Asad Qaiser, who chaired the session, continued to delay the vote on Saturday. The heated debates between the Pakistani government and its opposition were also repeatedly interrupted. Only when the speaker of the Pakistani National Assembly, Asad Qaiser, surprisingly resigned shortly before midnight could voting continue.

To avoid unrest, the government quarter in Pakistan’s capital, Islamabad, was shielded by hundreds of security forces after dark. A few days earlier, security forces had blocked important access roads to the parliament building with shipping containers out of fear of violent protests.

According to Pakistani Foreign Minister Shah Mehmood Qureshi, the outcome of the vote was due to a foreign conspiracy. He joined Khan in his accusations, because the ousted prime minister had repeatedly claimed in recent days that the United States was trying to overthrow his government. However, it is not clear what evidence Khan bases his allegations on. These are classified as secret and cannot be shown to the public, government officials said. The alleged US interference was the main argument used by the governing parties in the debate not to want to hold the vote.

Opposition politicians had repeatedly accused the former prime minister of poor governance and incompetence on economic issues. The prices for food, petrol and gas had recently risen massively in the South Asian country. In addition, Pakistan is struggling with a serious economic crisis as a result of the corona pandemic. In order to get funds again, Khan recently had to meet strict requirements from the International Monetary Fund (IMF), which demanded that Pakistan introduce more taxes and also increase the current ones. This now cost Khan a slim majority in parliament.

Pakistan, with a population of more than 220 million, had been ruled for more than half of its existence by the military, which had seized power four times. Observers feared that a prolonged standoff could force Pakistan’s military to intervene.