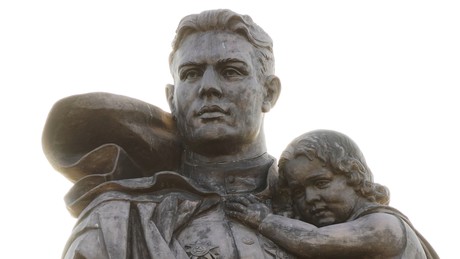 On Friday, the Ukrainian parliament expressed its approval and glee on the desecration of the Soviet memorial in Berlin on its Twitter account. Although at least one in four of the soldiers buried here is a Ukrainian, the Kiev regime sees itself as committed to a completely different tradition.

The desecration of the memorial to Soviet soldiers in the Berlin district of Treptow was welcomed on the official Twitter account of the Ukrainian parliament (Verkhovna Rada). The author of the tweet was happy about the deed with the words:

“In Germany, graffiti artists have identified who the real fascists are. They painted the memorial for the Soviet soldiers in Berlin’s Treptow Park red. On the monument you can see the words ‘Why?’ and ‘Ukrainian blood is on Russian hands’ as well as ‘Putin = Stalin’ and ‘Fascists’.”

The memorial in Treptower Park is the best known of a total of four memorials for the Soviet liberators in Berlin. The world-famous monument by the Soviet sculptor Yevgeny Vuchetich shows a Soviet soldier crushing a smashed swastika with his foot and protectively holding a German child in his arm. The Motherland statues in Volgograd and Kyiv were also designed by Vuchetich.

On the night of Thursday last week, the memorial was daubed with slogans and red paint. A reference to the Ukraine war can be seen in the slogans. However, the scribblings were not only related to the Russian troops and the current Russian government. Statements such as “Kill all Russians” were also written on the walls of the memorial. This indicates a Russophobic background of the perpetrators.

The Ukrainian journalist and blogger Anatolij Sharij, living in exile in Spain, commented on the statements made by the Ukrainian parliament on his Telegram account on Saturday:

“The Ukrainian parliament is pleased that someone wrote ‘fascists’ on the monument to the Soviet soldiers in Berlin. Were the Ukrainians who died in World War II not Soviet soldiers or was the war won solely by the Russians? Idiots.”

But modern Ukraine has long since placed itself in the tradition of the other side, namely the Bandera nationalists and Ukrainian Waffen-SS soldiers who shot Soviet soldiers in the back while they were on their way to liberate Auschwitz.

The malicious joy of the Ukrainian parliament over the desecration of the cemetery and memorial in Berlin-Treptow and over the fact that the buried Soviet soldiers of all nationalities were dubbed “fascists” is just one example among many.