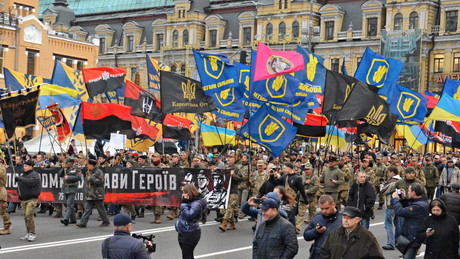 A commentary by Nebojša Malić

The latest wave of Azov heroization began sometime before the Russian military operation — infamously the widely publicized image of an AK-47-wielding Ukrainian granny taking part in a drill to repel invaders at regiment positions. In the last few weeks of March, however, these dime novels came bursting out of a compact group like bullets out of a Kalashnikov.

The first in the sheaf was a ten minute video by British state broadcaster BBC March 27, in which presenter Ros Atkins attempted to debunk Russian “lies” about Nazis in Ukraine. How can Ukraine be “held hostage” by Nazis when its president, Vladimir Zelensky, is Jewish, Atkins argued. She also referred to the 73 percent of the votes he had received in the last election and declared triumphantly:

“No far-right groups have any formal political power in Ukraine.”

Note the word “formal” – it takes over the whole meaning here.

Atkins’ contribution set the tone for subsequent reports on Azov. Two days later, on March 29, the Financial Times (FT) ran one article, which described the Azov Battalion as “a key factor in the nationwide resistance effort”. While acknowledging that Azov was founded in 2014 “by volunteers with nationalist and often far-right political leanings,” the FT shrugged off their Nazi affiliations.

Thus, the Nazi symbols used by the unit are described as “claimed as pagan symbols by some members of the battalion”. While this is being sold to readers at face value, it is literally false. The “Black Sun” (also known as the Sun Wheel) dates back to a mosaic commissioned by SS Chief Heinrich Himmler in the 1930s. While the superimposed Wolfsangel rune – historical German rather than Ukrainian heraldry – was used by several Wehrmacht and SS regiments, as well as by Dutch Nazis during World War II. More importantly, the symbols themselves were chosen by Azov’s founder Andriy Biletsky – a notorious Ukrainian white supremacist – as he himself admitted in a 2014 interview.

The authors of FT do quote Bilezky, but make no mention of his sordid past. But the key quote comes from a certain Anton Shekhozov. He claims that “Azov has depoliticized himself” and that his connection with the far-right movement is “rather irrelevant” today. The reader is simply to take the word of a professional Ukrainian “expert on Russia’s ties to the extreme right of Europe.” Because, as the Azov fighters themselves say: the Russians are the real Nazis! The icing on the cake is a request from an Azov fighter – identified only as Kalyna – “not to confuse the terms patriotism and Nazism.”

Meanwhile, the FT describes Stepan Bandera – the notorious Ukrainian nationalist who tried to collaborate with the Nazis and is responsible for the mass murder of Poles and Russians – as “a nationalist leader who opposed both nationalist and Soviet efforts to gain independence to prevent Ukraine.”

On the same day, March 29, CNN published its own version history. Zelensky is a Jew. And Azov does have a “neo-Nazi background that has not been completely erased by his integration into the Ukrainian military.” But it is “an efficient combat force”. Azov’s political wing – this time citing a German political scientist – won just 2.15% of the vote in 2019.

CNN also mentioned Bilezky, writing that he had allegedly spoken of wanting to “lead the white races of the world in a final crusade” – the part in which he is still added “against the sub-humans led by Semites” was omitted. Azov is then quoted, and the combat troops deny that Bilezky ever said that. Moreover, they have “nothing to do with his political activities and the National Corps party” – although CNN itself describes this party as Azov’s “political wing”.

CNN also unearthed a 2019 quote from Arsen Avakov – Interior Minister in the post-Maidan government – in which he claims that allegations of Nazi connections are “a deliberate attempt to discredit Azov and the Ukrainian military.” This is the same Avakov reported by Chief Rabbi of Ukraine Yaakov Bleich in November 2014 was criticized. At the time, he accused him of continuing to appoint people with a questionable reputation and ideologies associated with fascism and right-wing extremism to offices.

Finally came on March 30th nor the Times of London (ToL) around the corner. Their story begins with the emotional description of the funeral of an Azov soldier who was killed in the fighting outside of Kyiv. ToL also describe the Nazi iconography as possibly originally “rooted in the pagan beliefs” of Ukraine. Although the newspaper had to admit that Azov’s trademark, the wolf’s angel, was also used by Nazi Germany.

“We are patriots, but we are not Nazis,” is a quote attributed to Azov officer Yevgeny Vradnik. The Times uses the quote in the story’s title, and near the end the newspaper quotes an Azov commander in Mariupol who accuses the Russians of being “the real Nazis of the 21st century.” Azov members seem very good at following the narrative line, knowing their audience and knowing which buttons to push. For example, the ToL article repeatedly mentions the Azov fighters’ praise for the British NLAW anti-tank missiles.

Contrast this with the coverage Azov received in the west before 2022. At the January 2021 Time magazine called them a militia that “trained and inspired white supremacists from around the world.”

“Azov is much more than a militia. It has a political wing, runs two publishing houses and summer camps for children, and is a vigilante group known as the national militia, which patrols the streets of Ukrainian cities along with the police,” the article reads Time Magazine. And it states that “it also has a military wing with at least two training bases and a huge arsenal of weapons ranging from drones and armored vehicles to artillery pieces.”

The article also paraphrases the words of Azov’s “head of international public relations” Olena Semenyaka. She had told Time magazine during a 2019 tour of the Cossacks’ home that the group’s mission was “to form a coalition of far-right groups across the western world with the ultimate goal of seizing power across Europe take.”

Before the events of 2014, Bilezky led a neo-Nazi terrorist group called Patriots of Ukraine, whose “manifesto seemed to draw its narrative directly from Nazi ideology,” writes Time magazine. In an interview after the coup, Bilezky told the magazine he chose the Azov insignia. No mention of “pagan symbols” – just a hint that the Black Sun and Wolfsangel were “used by Nazi Germany” during WWII.

Even Bellingcat, that “open-source intelligence collective” that appears to be an extension of the British intelligence agenda, has raised alarm bells related to Azov. In October 2019 The research network complained that the militants had persuaded President Zelensky not to withdraw militarily from the Donbass, as the Minsk agreements had intended.

Although the “far-right groups have negligible popular support and virtually non-existent electoral power” — recall Atkins’ narrative above — “they continue to have success in establishing themselves in Ukrainian politics and society,” Bellingcat wrote back then.

This isn’t the first time corporate and state media in the West have glossed over a group they themselves until recently – and rightly – characterized as extremist. For example, just last year US public television attempted to whitewash an al-Qaeda affiliate in Syria – the Al-Nusra Front, later renamed Hayat Tahrir al-Sham – as “moderate rebels”.

Sure, politics and war often make for odd bedfellows. But if the bedfellows are open admirers of Adolf Hitler and Stepan Bandera, maybe it’s time to take a look at the comedy sketch to recall the BBC’s 2012 in which an SS officer asks, “Maybe we’re the bad guys?”

Nebojša Malić is a Serbian-American journalist, blogger and translator who wrote a regular column for Antiwar.com from 2000 to 2015 and is now a senior writer at RT. You can contact him on Telegram @TheNebulator and on Twitter @NebojsaMalic follow.