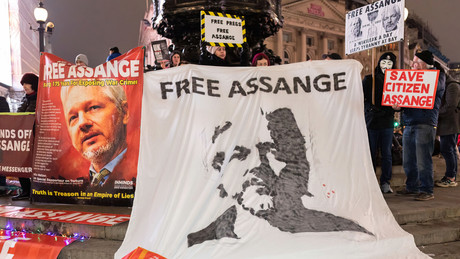 WikiLeaks founder Julien Assange has been in prison for exactly three years. On the anniversary, his wife accused the British and US authorities of “brutal political persecution”.

On the third anniversary of WikiLeaks founder Julian Assange’s arrest, his wife has condemned the detention as a criminal act. Stella Assange told Britain’s PA news agency on Monday:

“There is no hiding that Julian is the victim of brutal political persecution.”

She again urged the British government not to extradite her husband to the United States. Assange said the request violated the extradition treaty between Washington and London. Accordingly, no one should be extradited for political reasons. She added:

“The UK Government could end Julian’s detention at any time by honoring its treaty obligations.”

Assange was arrested on April 11, 2019 after spending years in the Ecuadorian embassy in London. The US judiciary wants to put the 50-year-old on trial for allegations of espionage. He faces up to 175 years in prison if convicted.

The British Supreme Court recently dismissed an appeal against the extradition of the native Australian to the United States. Now, on April 20, the extradition order is to be issued, which will then be sent to the British Home Secretary, Priti Patel. Assange’s lawyers then have four weeks to present grounds for objection. The final decision rests with Patel.

The UN Special Representative for Torture, Nils Melzer, had it on several occasions spokenthat in the case of Assange one can definitely speak of psychological torture.

On March 19th hosted the nationwide vigil movement “Free Assange” held a joint rally in Duisburg for the release of Assange and against his extradition to the USA.

More on the subject – “Journalism is not a crime”: Rally of nationwide vigils for Julian Assange