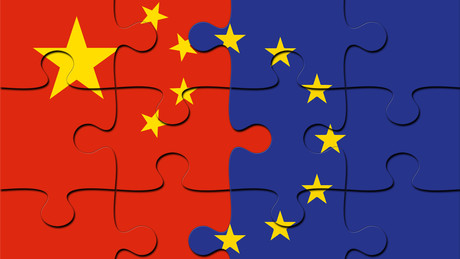 Since the beginning of the Ukraine conflict, the USA has been trying to increase its influence on the foreign policy of the European Union. Washington is also urging its European allies to take even stronger action against Beijing. But is that realistic?

An analysis by Timur Fomenko

US operations of influence in the “old continent” are extensive, ranging from an entire army of US-funded and US-directed think tanks to well-meaning journalists to politicians. Unsurprisingly, the relationship with Russia has been framed in this long-running effort to get the European Union (EU) to align with US preferences, including on Beijing, and the “Merkel legacy” of the (German ) to finally get rid of commitments in China.

This made last Friday’s China-EU summit a critical event. It is inevitable that newspapers like the Financial Times (FT) will attempt to embellish this event with exclusively negative narratives surrounding Beijing, such as there an article titled “Russia’s invasion of Ukraine forges new unity within the EU towards China”, which predicts an even tougher stance towards China as China seeks to “dodge a dive” from Moscow.

But that is far from reality. What the EU says and what the EU does are often two different things, as it tries to show any semblance of unity, no matter what the cost. In fact, in practice, Brussels no longer has the political will, unity, or resources to comprehensively force Beijing to do anything – especially after China again has affirmedthat its strategic partnership with Russia continues to have “no limits”.

Not only is the semblance of EU unity vis-à-vis Russia, which the FT article attempts to portray as “surprising” for Beijing, greatly exaggerated, but it seems even less plausible that the EU has any political resolve to endure the pain of a endure a head-on confrontation with the much stronger economic partner China, which in terms of nominal GDP is now an economic power larger than the entire EU. Either way, it seems clear that the path of aligning EU interests with those of US foreign policy, namely, will make Western Europe even weaker, poorer and less relevant than ever – typical of the self-flagellation the EU often indulges in at the behest of Washington , DC has already imposed.

Increasingly, the approach of Western nations towards China in relation to Ukraine is to order the cake and eat it yourself. Beijing is seen as an adversary, competitor and rival, and mainstream media portrayals are characterized by distrust, contempt and skepticism. There are moves to militarily build up the entire region around China, with the United States urging European countries to adopt their “Indo-Pacific strategies” of sending warships to the South China Sea and supporting Taiwan while maintaining a stance on the breakaway island presented as a binary struggle for supremacy between authoritarianism and liberal democracy.

Over the past two years, any Western goodwill toward China has been minimal overall. While most of Europe was not at the same low level as the Anglo-Saxon nations, US efforts to turn the tide through its channels of influence were still noticeable. On the other hand, China is still expected to cooperate and comply with the will of the West on various issues that serve its interests, not its own, often accompanied by blatant threats.

With such an attitude, it is inevitable that China will continue to view its strategic partnership with Russia as multifaceted and crucial. Why should Beijing push Moscow in front of a bus to please the West when the West, for its part, clearly shows no benevolence or good intentions towards China? Beijing is doing the right thing when it safeguards its various options and its own interests accordingly. While this does not mean fully condoning the situation in Ukraine, it also does not mean simply superficially condemning it at the request of certain countries. China’s own hedging is both prudent and strategically correct — because it would be naïve to trust the US and its vassals. If there is to be any cooperation or favors in this situation, Beijing has every right to demand a very high price for it.

Do EU members want peace talks with China? If so, then promoting the China-EU Comprehensive Investment Agreement (CAI), for example, must be part of it. Or Lithuania’s ridiculous adventurism in relation to Taiwan must end. Going beyond the harsh rhetoric, it should also be noted that the EU is currently not in a position of strength to retaliate seriously, even if it wanted to. Germany’s forecast for this year’s economic growth has just been lowered to just 1.8 percent as Germany’s disastrous energy policy begins to take its toll, while Spain’s inflation has already hit a record high of almost 10 percent. Can this EU afford to threaten and sanction China? And would every EU member support it at all? No chance.

So, beyond the usual political banter, China will face the EU wisely and pragmatically, carefully and subtly being careful not to rock the boat. The EU may not be quite as accommodating or friendly with China as it used to be, given the influences it faces. But it would be a very different game to be united on that, or to have the leeway to actually stand as a united bloc against Beijing when the EU doesn’t even have that unity towards Moscow. Ultimately, if European countries really wanted to do that, they would have to be willing to offer China at least as much as they expect themselves and stop believing in transatlantic fantasies. One should finally ask oneself in Brussels whether one still has a self-determined strategic autonomy and whether one can and wants to throw a win-win diplomacy with the largest trading partner overboard in order to meet the wishes of Washington. Either way, the current developments have entered a decisive phase.

translation from the English

More on the subject – Media report: EU wants to put pressure on China over possible support for Russia