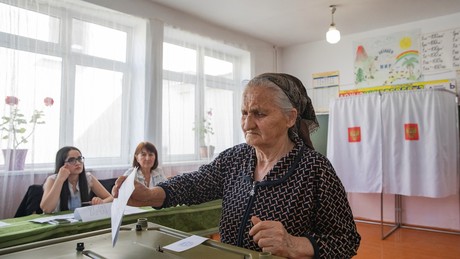 After counting 95 percent of the votes in the presidential elections in South Ossetia, it is clear that none of the candidates achieved an absolute majority. In the first ballot, the opposition candidate is ahead of the incumbent.

The incumbent president of South Ossetia, Anatoly Bibilov, is behind his challenger Alan Gagloyev in the presidential elections. Since none of the candidates achieved an absolute majority in the first ballot, there will be a second ballot in two weeks.

After counting 95 percent of the vote, President Bibilov trailed 33.5 percent behind challenger and leader of the opposition Nichas party Alan Gagloyev, who was backed by 36.9 percent of voters, according to official results.

The final official result is expected to be announced later today. It is already clear that there will be a second ballot in which the two leading candidates will take part. A statement by the Central Electoral Commission of the Republic reads:

“The Central Election Commission has ordered the re-election of the President of the Republic of South Ossetia for the two registered candidates who received the most votes.”

During the Soviet Union, South Ossetia was an autonomous region within the Georgian Soviet Socialist Republic. When the nationalist Zviad Gamsakhurdia seized power in Tbilisi in the late 1980s, he revoked the autonomy rights and threatened to expel the Ossetians from Georgia. This was followed by an armed conflict, which was settled with the mediation of Russia after the return of former Soviet Foreign Minister Eduard Shevardnadze to power in Georgia. Russia assumed the function of a guarantor for the rights of the Ossetian population.

In 2008, then-President Saakashvili tried to use military force to bring South Ossetia under the control of the Georgian central government. Russia intervened to exercise its guarantee obligation and subsequently recognized the independence of the Republic of South Ossetia. South Ossetia is currently striving to join the Russian Federation and thus unify with North Ossetia. A referendum on this is planned for the near future. Both leading candidates support these aspirations.

Around 50,000 people, mostly ethnic Ossetians, live in South Ossetia in an area slightly larger than that of Saarland. The majority of Ossetians live in North Ossetia, an autonomous republic that is part of the Russian Federation. The Ossetians are an Iranian-speaking ethnic group who have lived in the Caucasus since the 6th century and number over 700,000 worldwide. Of these, around 450,000 live in North Ossetia, another 100,000 in other regions of Russia and around 50,000 in South Ossetia. The number of Ossetians in Turkey is estimated at around 100,000 people. The self-designation is Iron and Digoron, historically the designation Alanen was also used.

The Ossetians are mostly Christian, only ten percent belong to Islam.