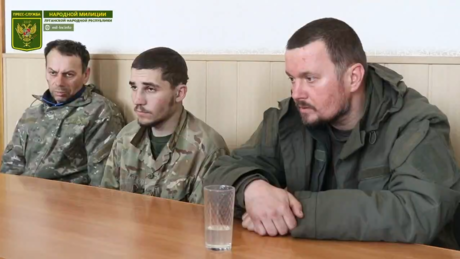 The press service of the People’s Militia of the Lugansk People’s Republic published a video on Sunday showing three defectors from the ranks of the Ukrainian National Guard. They report on criminal orders from their superiors to shoot at civilians and take part in shootings.

According to them, the soldiers were deployed in the Rubezhnoye, Severodonetsk and Lisichansk agglomerations. After fighting began in late February, their commanders issued orders to shoot at anyone who could not be identified as belonging to Ukrainian units. One of the men says:

“Our commanders forced us… gave us orders to shoot at any human who moved, regardless of whether it was a civilian or not.”

The men also reported that a few days ago, nationalist guerrillas brought a group of captured civilians from the town of Rubezhnoye to the National Guard base and ordered these civilians to be shot:

“There were men and women among them. (…) They wore white armbands, they were residents of the town of Rubeshnoye. They were lined up in front of us and we were ordered to shoot them. They wanted to shoot them for what they say happened in Bucha.”

The men say they refused to carry out the order and were themselves imprisoned in a dungeon for doing so. After their guards were heavily intoxicated one of the following nights, the three managed to escape. They then went across the front line and surrendered to the Lugansk People’s Militia units.

The information provided by the defectors cannot currently be independently verified.

More on the subject – A Proven Weapon: How to Control the “Massacre” Narrative