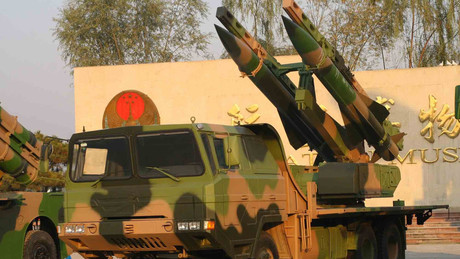 Media in both China and the West are speculating about an alleged delivery to Serbia of the FK-3 export version of the HQ-22 air defense system, itself the Chinese equivalent of the Russian S-300. One indication is the landing of six heavy transport aircraft in Belgrade.

A significant upgrade of Serbia’s air defenses has been reported by numerous media in the West and in China. Remarkably, the Serbian media wrote significantly less about it – perhaps also because the delivery of the suspected systems, FK-3, has not yet been officially confirmed. All the media referred only to circumstantial evidence – literally serious ones: six Y-20 heavy military transport aircraft want the non-governmental OSINT reconnaissance portal Evergreen Intel and the military department The Warzone of the online magazine The Drive in the sky on their way from China to Europe have determined. On Saturday, April 9, planes with the Chinese red star emblazoned on the fuselage sides landed at Belgrade’s Nikola Tesla Airport, according to observers spotted, filmed and photographed became.

The question immediately arose as to what load could require the use of six of these transporters, each with a maximum load capacity of up to 66 tonnes – it would definitely have to be something very heavy and could also be something very large. Probably brought up by some speculation from the quoted amateur flight observers, The War Zone expressed the suspicion that it could be the FK-3 anti-aircraft and missile defense systems, which Serbia will buy from China in 2020 famous The export version of the HQ-22, itself the Chinese equivalent of the Russian S-300, is both large and heavy – as is any system equipped with its own reconnaissance and target tracking and illumination radar and from a mobile launch pad an 8×8 chassis long-range guided missile with a mass well over a ton shoots down. Last but not least, the flight observers quoted by the magazine pointed out that at least some of these machines were missing the cover plates of the distribution systems for radar and infrared decoys. Especially with these flights, the Chinese side seemed to take possible threats extremely seriously – this too is a sign of a precious burden.

There has been no confirmation from the Chinese side so far. Zhao Lijian, a spokesman for the Chinese military, simply stated:

However, the military spokesman also gave a hint with an expression of hope, quoted here by the Associated Press:

“This is a project in line with our annual collaboration plan. We hope that the relevant media will not read too much into it.”

And finally, although Serbia has not officially confirmed or denied such assumptions, the country’s President, Aleksandar Vučić, at least announced in the presence of journalists: “In the next few days we will present the new pride of the Serbian army further strengthened our combat capability, which is already many times stronger than it was and is a significant deterrent to those who seek to threaten the stability of Serbia.” This is also an indication of very serious weapon systems, which in the military-political context and the recent military history of Serbia also most likely suggests modern long-range air defense. Only in 1999 was the country heavily bombed by the US Air Force.

Last but not least, numerous media also emphasized that China had impressively demonstrated the long-distance resilience of its military in the air with this delivery by airlift: The Y-20 was recently equipped by the Chinese industry with new engines specially developed for this type , replacing the previously used Russian ones of similar performance.