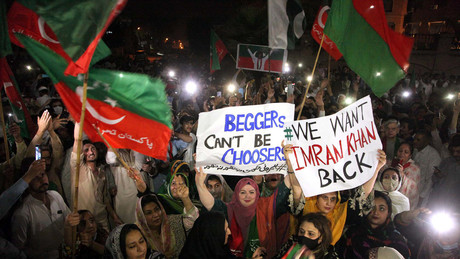 The clashes over government power in Pakistan ended for the time being with the election of Shehbaz Sharif as prime minister. However, new elections that are soon to take place and the economic problems ensure that the political crisis will continue.

This should not mark the end of the political crisis in Pakistan. It was ultimately triggered by months of double-digit inflation; food e.g. B. was 13 percent in April expensive than in the previous year. According to the Süddeutsche Zeitung, Khan is said to have received $21 billion in Chinese support negotiated have funds that have not yet been confirmed or flowed. He had rejected the IMF’s requirements for a loan of six billion US dollars because, among other things, further increases in fuel prices were made a condition.

When the ruling party lost its majority in parliament as a result of economic discontent, the opposition tabled a motion of no confidence, while the president wanted parliament to re-elect. A decision by the highest court has now led to the election of a new prime minister, which alone does not represent an end to the political crisis because the current parliament will only be in office until August. However, it is also conceivable that the resignation of MPs from the former governing party will force earlier elections, since by-elections would be necessary in any case.

The now elected 70-year-old Sharif comes from Pakistan’s political aristocracy. His older brother, Nawaz Sharif, was Pakistan’s prime minister three times but was barred from running for office after being convicted of corruption. Similar allegations have also been made against Shehbaz Sharif. In 2019, tax authorities froze Shehbaz and his son Hamza’s assets for money laundering; He was arrested in September 2020 and released on bail pending trial on April 14, 2021 by order of the Lahore High Court. The hearing has not yet taken place.

The Sharif dynasty’s center of power is Pakistan’s most populous province, Punjab, where Shehbaz Sharif has led the regional government on several occasions and owns a steel mill. He was also involved in projects financed from China. He is said to have good connections to the military, which is politically very influential in Pakistan and has taken power itself several times.

The second Pakistani political dynasty to ally with the Sharifs to overthrow Khan is the Bhutto family. With Zulfikar Ali Bhutto and his daughter Benazir, she has already provided two heads of government in Pakistan; she is currently represented by Benazir’s widower, Asif Ali Zardari, and her son, Bilawal Bhutto Zardari.

In March, at the beginning of the dispute, Khan accused the opposition of having formed an alliance against him on behalf of the US; In a televised speech, he referred to a letter from the Pakistani ambassador to the US, who is said to have said his removal from the post of prime minister would improve relations between Pakistan and the US. Khan had tried to distance himself from the United States in foreign policy and said that cooperation with NATO had damaged the country, especially in the regions bordering Afghanistan. He also ensured that Pakistan rejected the US-sponsored UN resolution on Ukraine.

Khan and his party are likely to continue to cause unrest. The Financial Times Pakistan quoted a Karachi analyst who said Khan’s “premiership tenure is over, but his policies may be getting stronger”. The first major demonstrations in Pakistan took place on Sunday. He himself tweeted: “The freedom struggle against a foreign regime-change conspiracy begins today.”

Pakistan became an independent state in 1947; but the freedom struggle begins again today against a foreign conspiracy of regime change. It is always the people of the country who defend their sovereignty & democracy.

More on the subject – Government crisis in Pakistan: How did Imran Khan suddenly become a villain in the West?