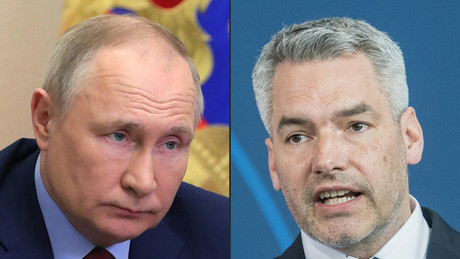 In a press conference after the talks with Russian President Vladimir Putin in Moscow, Austrian Chancellor Karl Nehammer drew a pessimistic conclusion. Putin must be confronted with the consequences of the war. Nehammer indirectly threatened international criminal justice.

As dpa reports from his press conference in Moscow, Austrian Chancellor Karl Nehammer says he has “no optimistic impression” after his talks with Russian President Vladimir Putin about the war in Ukraine. The Russian army is preparing an offensive in eastern Ukraine, Nehammer told journalists in Moscow on Monday evening. “This battle will be fought with vehemence”. Therefore, civilians from the contested areas would have to be brought to safety via humanitarian corridors. Nehammer blamed the Russian military solely for the fact that these corridors were not working.

Nehammer was the first head of government in an EU country to speak personally to Putin more than six weeks ago.

The Austrian Chancellor, who had already been in Ukraine two days ago, also called for the war crimes to be clarified. The United Nations could help, he said after his visit to Kyiv and the Bucha suburb, where hundreds of civilian bodies had been found. There are examples, such as from the Yugoslav wars, that such crimes could be solved. Those responsible should be held accountable.

According to Nehammer, Putin was suspicious of an independent prosecution of these crimes and of the so-called “international community of states”. However, Austria had offered to advocate for international criminal justice to deal with the matter.

The Austrian head of state defended his meeting with Putin against criticism. He wanted to address the horrors of war directly in the power center of the Russian Federation. “It takes the personal confrontation,” he claimed. The meeting with Putin had been agreed with the leaders of the EU, Turkey and the Ukrainian President Vladimir Zelensky. Perhaps ten such meetings with “personal address in total clarity” would not be enough, perhaps a hundred would be necessary. Nehammer also reported that the Ukrainian head of state is aiming for a meeting with the Russian president.

Nehammer consistently dubbed the Kiev troops “Ukrainian Self-Defense Forces” who, as he put it, were fighting bravely and with determination while the Russian army would suffer heavy casualties. At the same time, he raised the question of the treatment of Ukrainian prisoners of war in Russia, without going into the numerous existing reports of ill-treatment, torture and murder of Russian prisoners of war in Ukrainian hands.