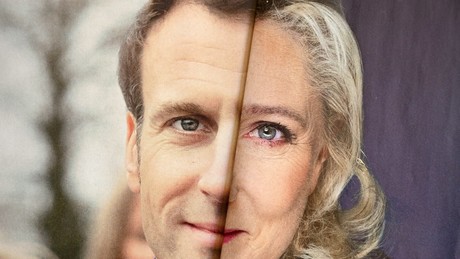 As in 2017, there will be a runoff between Emmanuel Macron and Marine Le Pen in this year’s presidential elections in France. According to the Interior Ministry, 92 percent of the votes have now been counted. Accordingly, Macron won 27.4 percent and Le Pen 24.3 percent. Left-wing politician Jean-Luc Mélenchon came third with 21.3 percent of the vote. The incumbent head of state and his competitor from the Rassemblement National will compete against each other on April 24th.

According to the Interior Ministry, right-wing Éric Zemmour passed the conservative Valérie Pécresse with around 4.8 percent with around 6.9 percent. Socialist candidate Anne Hidalgo was lagging behind at just over 1.7 percent. The Green Yannick Jadot came to more than 4.4 percent.

In the duel between Macron and Le Pen in 2017, Macron still won very clearly with around two-thirds of the votes. Polls predict a much tighter result this time. In addition, in France, the candidate who was second in the first round has repeatedly won in the second round.

For Macron and Le Pen, the next two weeks will be about mobilizing voters outside their camp. This could be much more difficult for the incumbent than it was in 2017 – even if many of the failed candidates expressed their future support on Sunday evening. Many French people see Macron as out of touch after five years in power. Some left-leaning voters may find it difficult to vote for him – for example because Macron has relaxed protection against dismissal and abolished wealth tax. On Sunday evening, the incumbent warned against too much certainty of victory: “Let’s not make a mistake, nothing is decided!”

Le Pen, on the other hand, who has been fighting for a moderate image for years, is now considered eligible in parts of the right-wing camp. She could win supporters of the eliminated Conservative Valérie Pécresse in the second round. Meanwhile, Zemmour clearly called on his supporters to vote for Le Pen. On the other hand, she can hardly hope for votes from the centre-left camp. But it would help her if frustrated leftists simply stayed away from the election and thus indirectly boost Le Pen’s share of the vote.

Third-placed Jean-Luc Mélenchon explicitly spoke out in front of his supporters after his performance in this French presidential election against the choice of Marine Le Pens in the runoff. “You shouldn’t give a single vote to Madame Le Pen,” he told his supporters on Sunday evening. Le Pen will face incumbent Liberal President Emmanuel Macron in the final round of the election in two weeks.

“I know your anger,” said Mélenchon. “Don’t risk letting yourself make irreversible mistakes.” Mélenchon, who finished third with just over 20 percent and thus missed out on a runoff, also called for people to continue. “As long as life goes on, so does the struggle.”

The French head of state has far-reaching powers and holds office for five years. Around 48.7 million French people were registered to vote. According to an estimate by the polling institute Ipsos, voter turnout was 74.0 percent shortly after the polling stations closed.