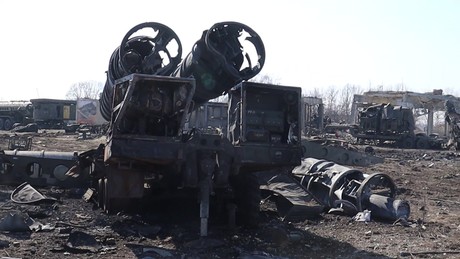 The S-300 air defense system, delivered from Slovakia to Ukraine “in a secret operation”, was apparently partially or completely destroyed by a Russian missile attack shortly after its arrival in Ukraine. The Russian Ministry of Defense officially confirmed reports from Sunday today.

As early as Sunday, reports were circulating on social networks about the destruction by Russian rocket artillery of the S-300 air defense systems delivered from Slovakia to Ukraine. On Monday, the Russian Defense Ministry confirmed the destruction of at least part of these systems.

“On Sunday, April 10, high-precision sea-launched Kalibr missiles destroyed the equipment of the S-300 anti-aircraft missile division hidden in a hangar on the southern outskirts of Dnepropetrovsk, which had been supplied to the Kiev regime by a European country. Four S-300 missiles and up to 25 members of the Ukrainian armed forces were hit.”

On April 8, Slovakia confirmed that it had delivered one of its S-300 air defense systems, which it still had from the days of the Warsaw Pact, to Ukraine “in a two-day secret operation”.

“I can confirm that the Slovak Republic donated the S-300 anti-aircraft missile system to Ukraine after Ukraine asked for support,”

It is currently not possible to judge whether everything delivered from Slovakia has been destroyed with the now officially confirmed blow. Reports on Sunday also spoke of strikes against S-300 systems in the Nikolayev region. To this end, Konashenkov today only confirmed the destruction of a target acquisition and control radar belonging to the system.

A large explosion was reported from Nikolayev itself on Sunday evening, which was probably the result of a rocket hitting a port used for handling nitrate salts. Fortunately, the port facility is located away from residential areas and was not in operation on Sunday, so that no personal injuries have been reported at the moment.

More on the subject – Media: New US military aid of a special kind – delivery of Soviet anti-aircraft weapons to Ukraine