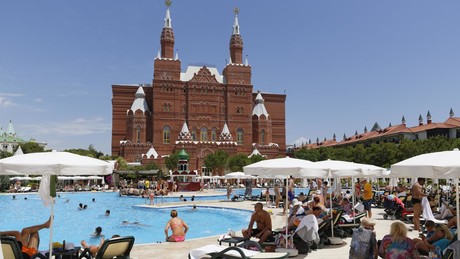 Because of the sanctions against Russia, Turkey wants to attract more Russian tourists to the country. Among other things, the authorities are planning a new airline that will carry travelers from Russia to popular Turkish destinations.

Turkey is one of the few countries currently served by direct flights from Russia. Some Russian tourists use the country not only as a holiday destination, but also as a transfer option to travel from there to the European Union, for example.

Now, Turkish authorities have approved a three-step plan to attract more Russian tourists to the country, Sabah newspaper reported. Among other things, the establishment of a new airline is planned “in the near future” that will fly between Turkey and Russia. The Antalya-based airline is said to fly Russian tourists to popular Turkish holiday destinations and be provided with aircraft that have no insurance risk and are not subject to secondary sanctions. “Thanks to this airline, it will be possible to attract an additional million Russian tourists,” the newspaper reported.

In recent weeks, the demand for plane tickets to Turkey has increased rapidly in Russia. The reason for this are sanctions against Russian aviation and the closed airspace in Europe, the USA and Canada for Russian machines. Turkish airlines responded by increasing the number of flights to Russian cities and using more spacious aircraft. However, the prices have also risen accordingly.